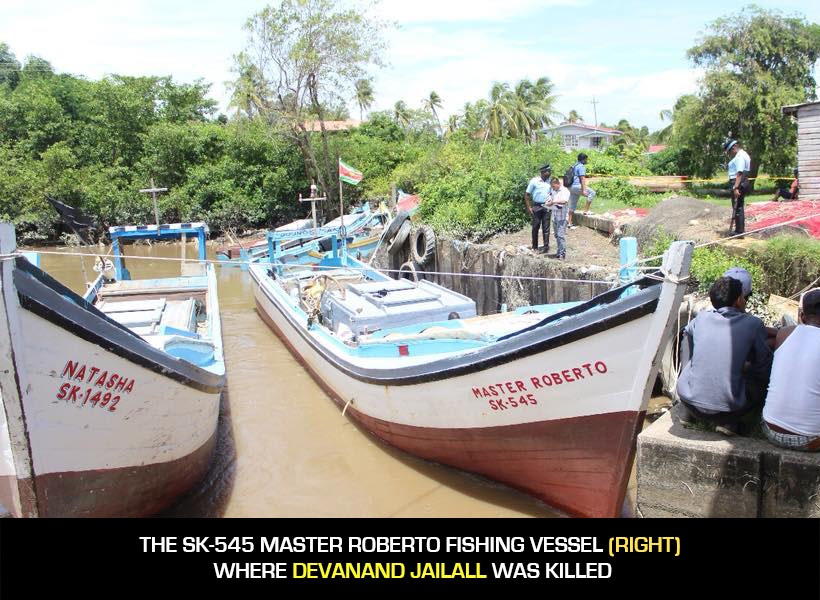 Police arrested a 45-year- old fisherman, who reportedly slit his colleague’s throat on Thursday afternoon (May 17,
2018). The incident occurred shortly after 13:00 hrs onboard the SK-545 Master Roberto fishing boat which was docked at the Number 65 sluice, Corentyne, Berbice.

Jailall’s coworker was arrested hours after fleeing the scene. The suspect, who resided in Corentyne, reportedly
murdered the 38-year-old man in the presence of another fisherman and the captain of the vessel.

Reports are that the deceased and the suspect were imbibing with the captain of the SK-545 Master Roberto vessel
along with another fisherman when an argument broke out onboard the vessel between the four men. It was reported to the police that the argument was as a result of Jailall smoking a joint, which they claimed was
cocaine.

When the victim refused to dump his spliff, the suspect allegedly grabbed a knife that was nearby and rushed to him
and slit his throat. He then jumped off the vessel and escaped.

The suspect was nabbed in Corentyne. This was some four hours after the murder.

Meanwhile, the deceased sister, Anita Lall in a telephone interview with the Guyana Standard said that her brother
visited her home on Wednesday but she was not there.

“He went by me and ask my daughter where I was that he wanted to see me and his son and he waited for some
time and then left,” Lall said while adding that he never returned.

The fisherman leaves to mourn his teenage son and siblings.

Up to press time, the boat captain along with the third fisherman, who witnessed the murder were assisting the
police with the investigation.