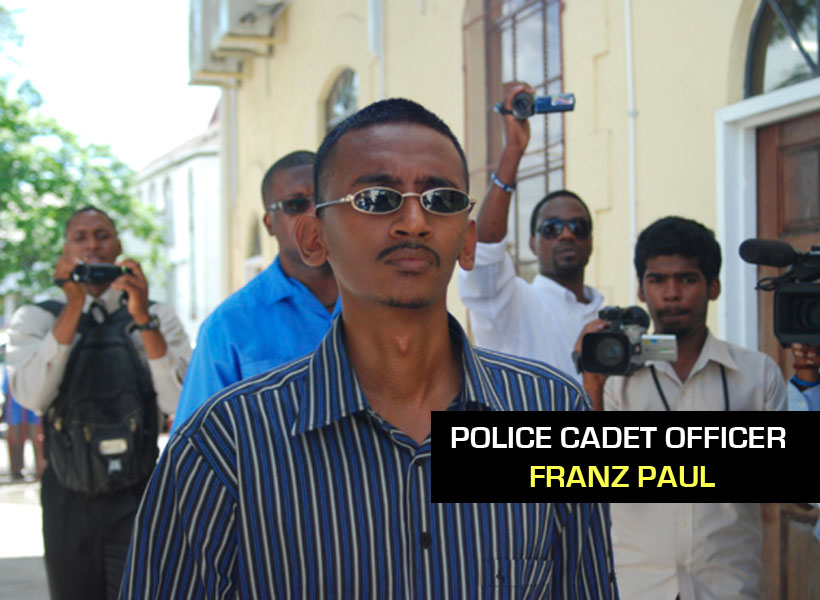 Police Cadet Officer Franz Paul, who was before the courts on wounding charges after shooting a then 15-year-old boy in the mouth, has compensated his victim to the tune of $2M.

In the circumstance, the Director of Public Prosecutions (DPP) Shalimar Ali-Hack withdrew the charges against the law enforcement officer today (May 21, 2018) quashing a trial into the offences that was being conducted by Senior Magistrate Fabayo Azore at the Georgetown Magistrates’ Courts.

The trial, which had been on-going from 2014, was in its final stages of completion.

In fact, Police Prosecutor Sergeant Dominic Bess closed the case for the state and Paul told the court his side of the story, by among other things, calling his parents, sister and a pathologist to testify on his behalf.

Attorney-at-Law Roger Yearwood was retained by Paul who had been out on High Court bail pending the determination of the matters.

It was alleged that on April 30, 2014 in Georgetown, Paul discharged a loaded firearm at Alex Griffith with intent to maim, disable, disfigure or cause him grievous bodily harm.

It was reported that Nadia Paul, Franz Paul’s sister was robbed on April 30, 2014, and that sometime after he took her to the police station to make a report of the incident.

After investigations were done, Griffith was arrested by a party of police ranks under the command of Paul. During the process of detaining the youth, Paul allegedly discharged a loaded firearm in the teen’s mouth.

It was then the teen dropped to the ground and was reportedly dropped off at the hospital by police ranks.

During an identification parade which was held at the Brickdam Police Station, Griffith identified Paul as his shooter.

In January 2015, Paul and a police corporal were hauled before the courts for allegedly attempting to pervert the course of justice in the matter involving Griffith. It was alleged that Paul, while under close arrest during the investigation of the shooting, had contacted a police corporal, who visited him at the Mahaica Police Station and presented him with a firearm and ammunition book to allow him to alter the records.

However, the charges against them were dismissed by now Chief Magistrate Ann McLennan who cited insufficient evidence.

Paul was interdicted from the Guyana Police Force.