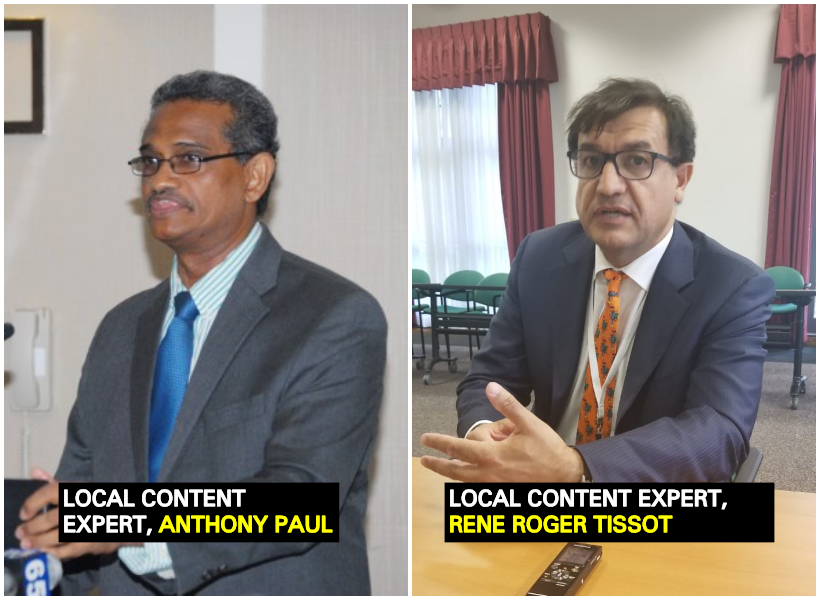 A Local Content Policy is one of the documents in the pipeline for Guyana. The document is supposed to ensure Guyana’s services and goods are given priority in the oil and gas sector.

Recently, the government published the second draft of the policy on at least two state-owned sites.  The coalition is now preparing to engage in further consultation on the policy.

However, international onlookers have pointed out that the draft document may be a failure before it is even finalized.

In an interview with the Guyana Standard, Oil and Gas Expert, Rene Roger Tissot said that the draft policy should have been informed by a survey of skills and resources available here.

Tissot, who is also a Local Content Expert, said that such a survey would help to inform decisions on what percentage of local goods and services should be used in the sector and during what phase.

Tissot said that in the absence of a survey, Guyana will find difficulties in implementing any type of employment and procurement target. He said that this would occur because of the mismatch between the resources available and the “dreamy numbers” put in place as targets to be reached.

Tissot continued, “Then you are going to use that same ‘unrealistic’ policy to negotiate with oil companies and then there will be a push back. The companies also do their survey and when they look at your policy, they will know whether it is reasonable or not. And they will tell you, ‘Where are you going with those numbers for employment? That is not possible. You don’t have the people.”

He added, “And then what will you say? You can’t say anything because you don’t have the results of a survey to back you. Policy without evidence is a recipe for chaos.”

Significantly, the Local Content Expert said that Governments must do its own survey and not rely on any that is done by an oil company. He said that the objectives for the two parties will always be different.

Guyana’s Local Content Policy is being prepared by Trinidadian expert, Anthony Paul. He has prepared similar policies for various countries, including the one for his place of birth.

The second draft policy for Guyana has no provisions for procurement and employment targets. According to the Ministry of Business which is tasked with overseeing the completion of the document, these will be put in place later on after consultations with the public. (See link for the draft policy: https://www.nre.gov.gy/wp-content/uploads/2018/05/Second-Draft-Local-Content-Policy-Framework.pdf)