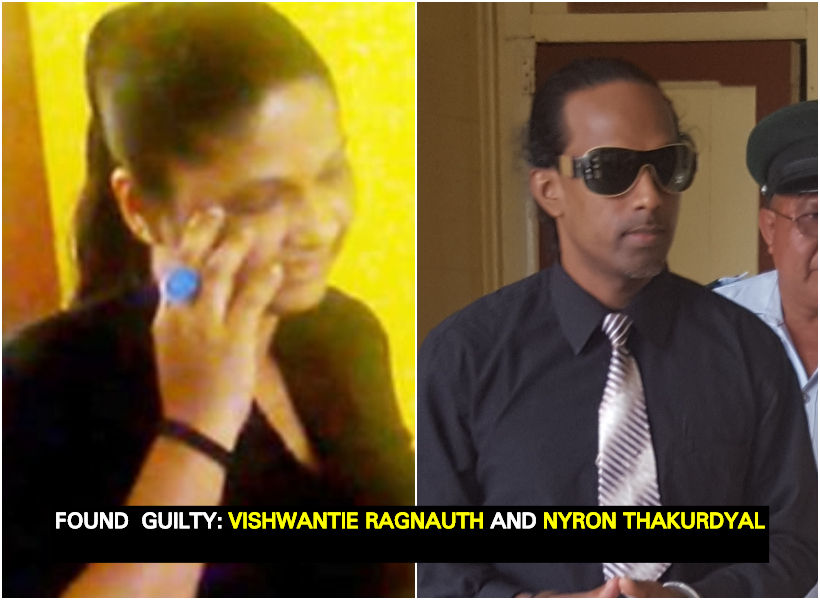 Vishwantie Ragnauth and her reputed husband Nyron Thakurdyal were this afternoon (June 15, 2018) convicted of the December 26, 2014 (Boxing Day) murder of her uncle Sunil Ramsundar. The victim was stabbed to death at Skull City, Patentia, West Bank Demerara.

Ragnauth also known as ‘Shelly’ and Thakurdyal, called ‘One Eye’ were found guilty by a 12-member mixed jury.

The guilty verdicts were unanimous.

Although the two of them were found guilty, they were not sentenced to a term of imprisonment.

This is was so because their Attorney-at-Law, Nigel Hughes requested probation reports in favour of his clients.

The request was granted by trial judge Sandil Kissoon who adjourned the matter until Tuesday, June 26, 2018, for presentation of probations reports, followed by sentencing.

According to reports, on Boxing Day of 2014, Ramsundar was stabbed and killed by his niece and her spouse, after he attempted to settle a disagreement. It was reported that on the day, Ragnauth assaulted her mother, who is a sister of Ramsundar.

Upon seeing his sister crying, the now dead man had approached her to inquire of the problem. After an explanation was given to him, Ramsundar then confronted his niece and an argument ensued between them.

Things escalated, and Ragnauth’s spouse and Ramsundar became involved in a scuffle, during which Ramsundar was allegedly stabbed about the body by his niece and the man.

The injured man collapsed and was rushed to the West Demerara Regional Hospital where he was pronounced dead on arrival.