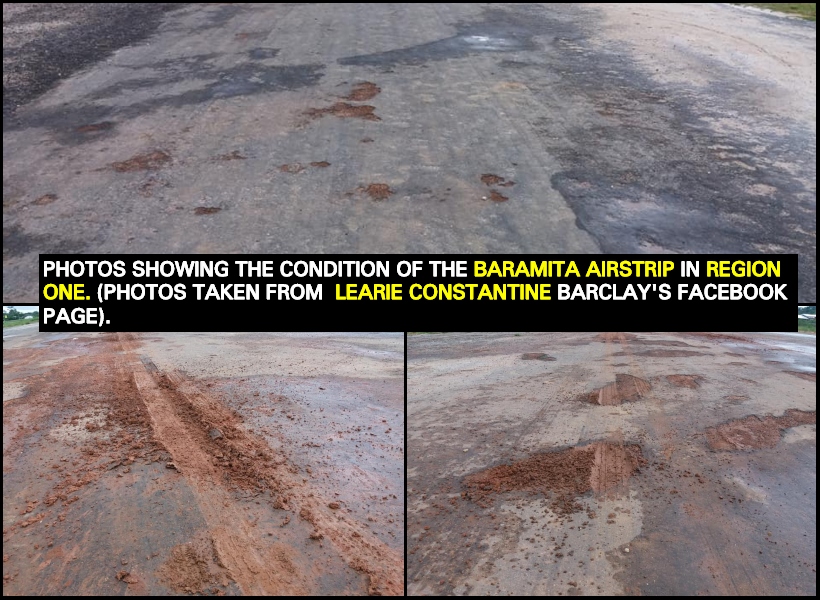 Amidst growing concerns by pilots and passengers, the recently upgraded Baramita Airstrip is set for another upgrade. This is despite the fact that the runway was upgraded some six months ago.

In light of reports on the poor condition of the path in Region One (Barima/Waini), officials from the Ministry of Public Infrastructure (MPI) and the Guyana Civil Aviation Authority (GCAA), along with the project’s contractor, visited the airstrip to conduct an assessment last Tuesday.

During that visit, a number of issues cited were the absence of routine maintenance of the airstrip and misuse of the runway. Vandalism was also reported as being one of the factors that contributed to the deterioration of the runway.

These findings and recommendations were compiled in a report and disseminated to the media.

During the assessment, it was revealed that the film of bitumen that formed the sand seal would have detached from the base course at numerous areas, creating the appearance of interspersed potholes.

With the exception of three locations where potholes actually exist, no signs of structural failure were observed. It was noted also, that where the seal was not in place, the base course is still intact.

Presently, there are no depressions in the exposed base course; the only difference in elevation/level between such areas and the adjacent areas where the seal is intact, is the thickness of the film of bitumen which is thin – less than an eighth of an inch.

The findings of the report indicate that there is encroachment of vegetation at least five feet into the runway on both edges and clumps of grass within the runway.

The assessors have concluded that there is a lack of regular maintenance.

According to Aerodromes Inspector, Alphonso Mangah, a maintenance contract is in effect with one of the villagers, who is responsible for weeding the shoulders and conducting routine repairs to the runway for which quarterly payments are made.

Misuse of Runway and Vandalism

The report states also that ruts on two locations are evidence of All-Terrain Vehicles (ATV) and presumably other vehicles traversing the runway.

Additionally, there were broken bottles on the runway.

Finally, several of the markers that demarcate the runway were displaced and vandalized, the report states.

The contractor will reconstruct the base and reapply sand seal at areas with potholes as well an area measuring about 30ft x 20ft where most of the seal has lifted.

The Ministry stated that while it cannot be definitively established whether the Contractor is liable for the other areas, particularly within the existing runway, the company – Ramzan Ally Khan Construction, has undertaken to resurface all areas where the seal has lifted.

The firm is expected to mobilise next week and has committed to completing the corrective works within two weeks thereafter, providing that the weather is favourable.

The remedial works are expected to last a month.

Further, all maintenance contracts for airstrips will be redrafted before the current contracts expire and the new contracts will be used from next year.

Meanwhile, the Ministry will examine upgrading the surface of the runway to a bituminous surface treatment, most likely in the next budget cycle but periodic maintenance of the seal, particularly in the touchdown zone, will be undertaken in the interim.

The government has also begun inspections of all other airstrips where this method of sealing was used to ensure similar issues do not occur.

The entity will also review the performance of maintenance contracts to ensure that projects were executed properly. If it is discovered that same is unacceptable, immediate action will be taken since the safety of passengers is the top priority.