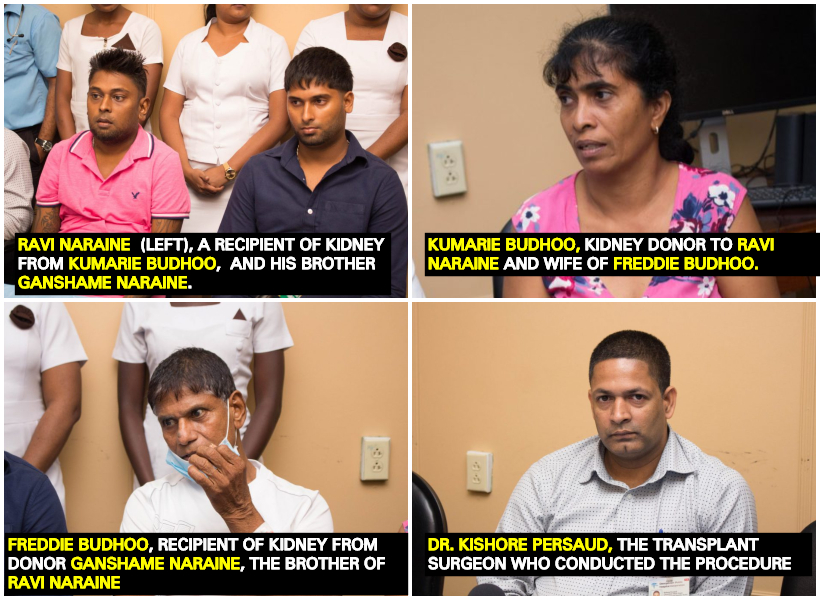 Two men now have a new lease on life after successful kidney transplant surgeries were completed on them at the Georgetown Public Hospital Corporation (GPHC). These two surgeries were done on Monday by Transplant Surgeon, Dr Kishore Persaud.

Approval was sought by Dr Persaud and a team from the GPHC administration to move in the direction of performing the paired-exchange kidney transplant procedure. This process involves the patient who has a willing but incompatible benefactor prepared to donate their kidney to another person in need. However, that needy beneficiary must have a compatible family member willing enough to give a similar organ to the initial patient.

Dr, Kishore indicated that the procedure which is new to Guyana occurs quite regularly in first world countries. The two patients, Ravi Naraine 30 and Freddie Budhoo 58, suffered kidney failure and were in desperate need of kidney transplants. Naraine’s family members were tested for compatibility but none were a match.
However, Naraine’s brother, Ganshame Naraine was a positive match to Budhoo who was diagnosed with double kidney failure in November 2017. This is when Dr Persaud thought it best to have an exchange done since Freddie’s wife, Kumarie Budhoo is a match to Ravi.

After several discussions with both families, it was realised that the process was a win-win situation. The go-ahead was given to have four surgeries done, saving the lives of two men.
“One of the biggest fear of this transplant is how do you prevent one person from pulling out. You will have to do the surgery together. So, the issue is how do you prevent (one person agreeing to give the kidney today and changing their mind tomorrow). That would be a big setback. So, we admitted all four patients and we tried to do their surgeries consecutively,” Dr Persaud explained.

Kumarie Budhoo, one of the donors, said that she felt encouraged after she realised what an impact her deed could have on an entire family.

“Actually, I could’ve given to both. I am a match for both my husband and Ravi. The first time I saw Ravi and I heard his story from Dr Kishore and when we met with him, I realise that he needed my help and we could’ve done something,” she explained.

Had the two families not agreed on the paired exchange kidney transplants, both patients would have remained on dialysis if a match within each of their families has was not found.

According to Dr Persaud, dialysis costs about $15,000 per patient, per session. The government assists by providing the first forty dialysis sessions free of cost to patients. (Taken from the Department of Public Information)