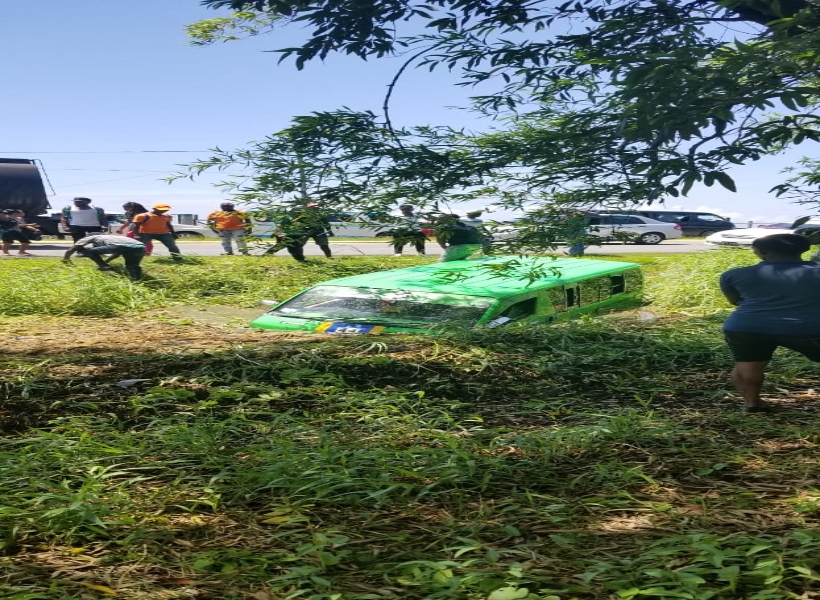 Consumed by the desire to make it to the Georgetown Park ahead of his colleagues, a reckless driver en route from Mahaica landed himself and several passengers in a trench that borders the Carifesta Avenue.

The incident occurred around 12:44. Angered passengers told the Guyana Standard that the driver of the Route 44 minibus seemed intent on overtaking any vehicle that was in his way. One Mahaica resident related that the driver was asked by several persons to slow down. But he refused to listen.

“When we hit Carifesta Avenue, de man just continue speeding through. He had two of he friends in front of he because the conductor turn round and tell he how Genip and Wallace in front of he. He overtake one of them and get through and when he try to do it to the other minibus, like he realise too late that he couldn’t make it and when he try fuh mash brakes, we end up in the trench,” explained 28-year-old Michelle Thompson.

The Guyana Standard understands that none of the passengers were hurt. They were however, reluctant to help the driver out of the vehicle. They left him to soak in the murky trench water. A public spirited citizen eventually jumped into the trench and assisted the driver who appeared to be trapped in the bus by his seatbelt.