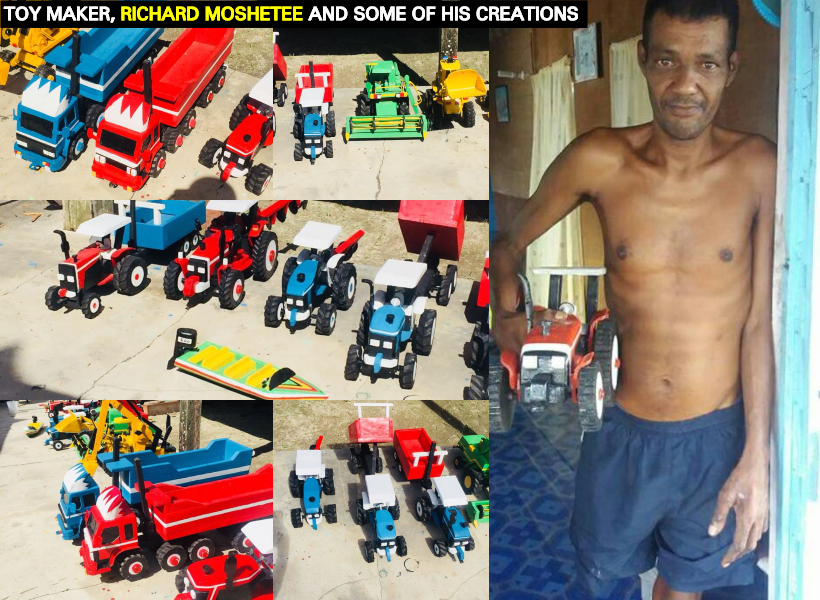 A man—forced into begging after becoming an amputee has uncovered new talents in creating wooden toys from local wood.

Richard Moshetee called “Ricky” of Anna Regina, Essequibo is now hoping to turn his talent into a business and make a career out of it to provide for himself and his three sons, Ramesh, 13; Mark, 15; and Munesh, 17.

Presently, the father of three makes wooden toys, including tractors, boats and trucks. He markets them in his village but because the demand for the handmade toys is not very high, he is forced to beg on a part time basis.

The 40-year-old man turned to begging three years ago when he lost his right leg to diabetes having been diagnosed with it 10 years earlier.

It was only about a year ago that the father of three discovered his hidden talent when he picked up a chisel and a hammer and started carving the toys from a piece of old wood he had in his yard.

“I used to make these toys for myself as a little boy, but not as good as they are now… and then I stopped, but now, they support me and my children,” Moshetee pointed out, while adding that he wants to permanently quit begging on the streets.

To make the toys, he would purchase wood and carve out the various designs. The wheels are made from spindles—it usually takes about a week to make two of his products which are being sold for about $6,000 depending on the size.

Only recently, a relative of Moshetee transported some of his products to Georgetown with the aim of reaching potential customers. The creations are available at Enaya’s Closet located on the Public Road Kitty, next to the Guyoil Gas Station.

Moshetee is hoping to get the support from the public. Anyone desirous of purchasing his toys can contact him on 621-8612 or 6587999.