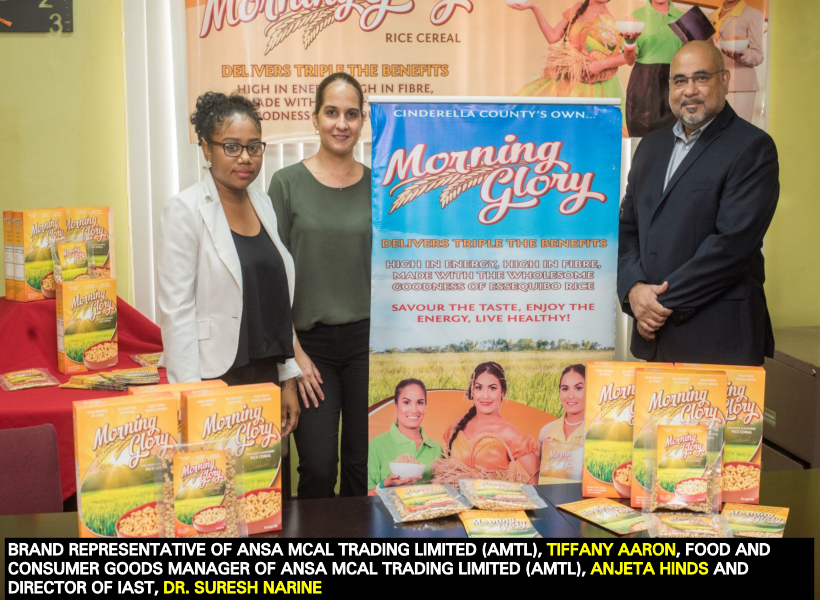 After more than six months on the market, the local rice cereal ‘Morning Glory’ has recorded
sales ranging from $30Million to $35Million.

On Wednesday, ANSA McAL Trading Limited (AMTL) in collaboration with the Institute of
Applied Science and Technology (IAST) officially launched the cereal at the AMTL head
office.

In brief remarks, AMTL’s Food and Consumer Goods, Manager, Anjeta Hinds said that the
company is happy to have been entrusted by Director of the IAST, Dr. Suresh Narine, to
promoted the cereal which is well on its way to becoming a staple in Guyanese households.

“We (AMTL) thank Dr. Narine for partnering with us and allowing us to take his
‘baby’ to develop it as a staple, as a breakfast cereal and nutritional value-added
product into the market and into the homes of fellow Guyanese,” Hinds said.

She noted that AMTL is known for providing products that are in great demand, hence the
decision to do the same for a local product. The cereal is known for its use of locally grown
rice from Essequibo, the use of organic and nutritionally beneficial products like molasses
and other vitamins and minerals.

In 2017, IAST commissioned its long-awaited rice-cereal plant at Anna Regina on the
Essequibo Coast. The factory currently employs approximately 22 highly trained staff
members of IAST. The manufacturing process is of the highest quality and standard and is
comparable to any operation in the developed world. The plant has the capacity to produce 1
tonne of the cereal within a five-hour period.

Dr. Narine noted his satisfaction to have been able to partner with AMTL a known distributor
of quality products which he said which fits well with the image of Morning Glory and what
it represents for the country.

“We think of their partnership with us as an endorsement of the level that Morning
Glory has achieved since we know the company only distributes quality products.
Anyone can make a thing but it takes a tremendous amount of effort, dedication and
focus to make it good. We would like to think that Morning Glory is a great thing,” the
Director said.

He encouraged members of the public to try the cereal and compare the taste, texture,
packaging, nutritional value and general appeal of the Morning Glory rice cereal, to other
imported brands.

“We believe that this product is an example of what Guyanese can do when we focus
our collective efforts and what we can do when we inject national pride into the
product,” Dr. Narine remarked.