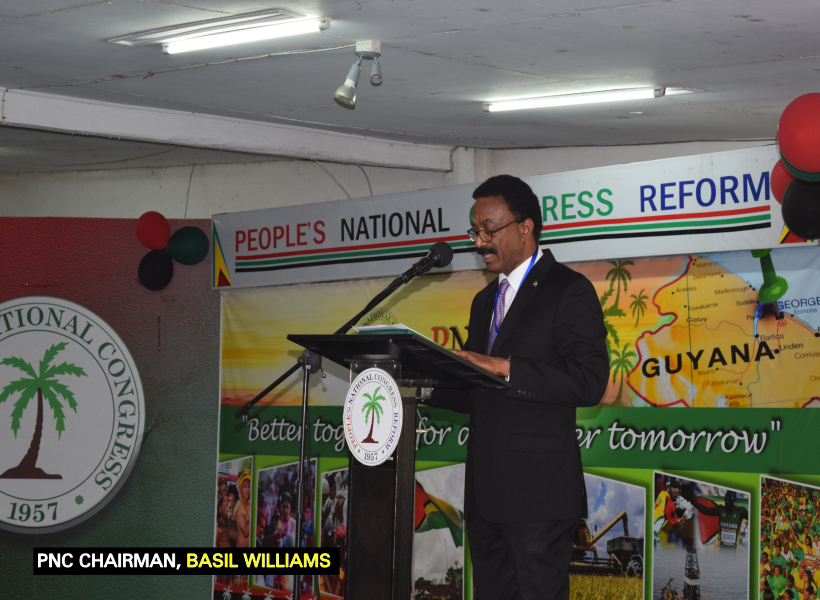 As the nation gets closer to the production of oil and gas, the government must become intolerant to corruption.

This was one of the central themes in the message of the People’s National Congress Reform (PNC/R) Chairman, Basil Williams. He made these and other remarks at the 20th Biennial Delegates Congress. The event was today held at Congress Place, Sophia. It continues tomorrow and will conclude on Sunday.

Williams told the audience that comprised of Government members and representatives of the Diplomatic Community, that the administration has demonstrated zero tolerance for corruption. In this regard, the Legal Affairs Minister said that the government embarked on a vigorous anti-corruption campaign which led to the establishment of the State Asset Recovery Unit (SARU).

The Attorney General said, “Our tolerance towards corruption is important as we are on the cusp of transformation with our emerging oil industry. This new industry will bring investors to our shores. Therefore, we have to ensure that the integrity of our financial systems.”

He added, “It is for this reason that the government has been working tirelessly to ensure we are compliant with the Financial Action Task Force’s 40 recommendations and international instruments including the United Nation’s Convention Against Corruption. Additionally, we are working on a legal framework to ensure that the oil wealth is managed properly for the benefit of all Guyanese.”

Further to this, the Minister of Legal Affairs said that in a matter of months, Guyanese will have to decide who they will entrust with the control and custody of the proceeds from the oil wealth.

He said, “Surely it should not be those who in 23 years, failed to distribute what wealth we had, to all Guyanese. They starved us and discriminated against us, marginalized us. It is therefore up to the PNC to save and protect the nation. This is not time to experiment or take chances with another 23 years.”

Over the next two days, Williams noted, the members of the Party will be engaged in formulating the ways to execute its vision for the nation.

He said, “As we strategize and deliberate. Let us not forget that our duty is always first to the Guyanese people and we must remain committed to ensuring their well-being as we have done for the past 61 years.”

Williams’ position for PNC Chairman is being contested by Minister of Social Protection, Amna Ally and Minister of State, Joseph Harmon. These and other results will be announced on Sunday.