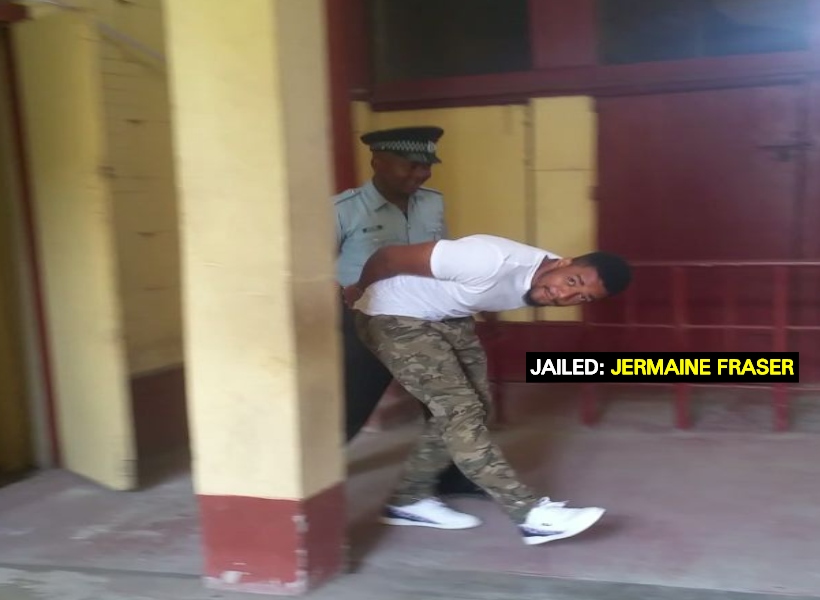 A man who conned his victims by posting on his Facebook wall that he has motor vehicles to sell, was this morning sentenced to nine years imprisonment after being slapped with several fraud charges.

Jermaine Fraser, 24, received a sentence of three years on each of the three charges, which will run concurrently.

Fraser appeared before a City Magistrate where four charges of obtaining money by false pretense were read to him.

The first charge read that on April 26, 2018, at Georgetown, with intent to defraud, he obtained the sum of $400,000 from Baldeo Poran, by pretending that he was in a position to sell him a Toyota Carina 212 car, knowing same to be false.

It was further alleged that on May 4, 2018, at Laparkan Lombard Street, Georgetown, with intent to defraud, he obtained the sum of $300,000 from Ashely Singh, by pretending that he was in a position to sell her a motor bus, knowing same to be false.

The third charge stated that on June 29, 2018, at Charlotte Street, with intent to defraud, he obtained the sum of $200,000 from Floyd La-Fleur, by pretending that he was in a position to acquire a minibus, knowing same to be false.

The last charge read that on July 31, 2018, at Georgetown, with intent to defraud, he obtained $1.4M from Daywan Persaud, by “falsely pretending” that he was in a position to obtain a Primo motor car for him, knowing same to be false.

Fraser pleaded guilty to the first three charges and denied the last charge after they were read to him by Chief Magistrate Ann McLennan in the Georgetown Magistrates’ Courts.

Police Prosecutor, Neville Jeffers stated that relative to a Facebook post, the victims contacted Fraser and he met with them.

The court heard that Poran met with Fraser at the Guyana Revenue Authority (GRA) with the intention of buying a motor car. Fraser then went into GRA to process the registration of the said car while the victim waited outside. After waiting for about an hour Fraser never returned.

One month after, the con artist met with Singh at Guyana National Industrial Corporation (GNIC) where Singh handed over the money to him and he went into the building where he spent 15 minutes.

Fraser then ran pass the victim and made good his escape on a motorcycle.

One month after, Fraser lured his third victim, Laflore at the High Court in Georgetown, where he handed over the money mentioned in the charge. Fraser then went into the High Court and he never returned to the victim.

The victims made reports and an investigation was launched. Fraser was later arrested and charged for the offences.

The Magistrate, after listening to the Prosecutor facts, sentenced Fraser to three years on each of the three charges. The sentences are to run concurrently.

Fraser was instructed to make his next court appearance on August 31, 2018 in relation to the charge he pleaded not guilty.