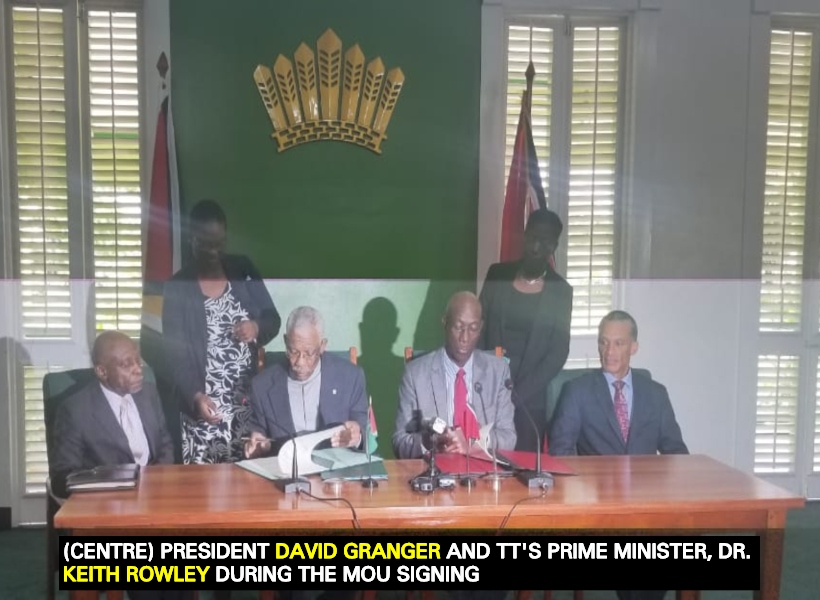 After several rounds of “intense” discussions, President David Granger and Prime Minister of Trinidad and Tobago, Dr. Keith Rowley, signed a crucial Memorandum of Understanding (MoU) on Energy this morning at State House.

In his brief remarks, President Granger promised that the MoU is not a “sell out” of the sector to Trinidad and Tobago. He insisted that there is nothing for the private sector to worry about; that the agreement will allow both countries to benefit from the wealth to come.

Granger said, “The MoU is largely concerned with energy but there are other areas of interest. We extended our conversation in the area of agriculture, sport, and security, and we expect as a result of this engagement today, relations between the two Republics will become stronger.”

The Head of State added, “There is much to be learnt from Trinidad and Tobago in terms of exports, standard of living, education, and the petroleum sector. By collaborating, we will be able to combine our natural resources with their entrepreneurial expertise and it will turn out to be a win-win situation. This is a significant step in making both parties stronger. We will be able to benefit from the experiences of Trinidad.”

Prime Minister, Dr. Rowley said that he was honoured to have inked such an important agreement with Guyana but did not hesitate to express his disappointment with the controversy that it sparked.

The politician said, “To those who are mindful of a TT takeover of Guyana’s good fortunes, to me, that is disappointing because we are working for all people of CARICOM to do better. So to come up against that, it is disappointing. This is simply the participation of a good neighbour with those who have a need for our finance, our skills, our experience. It is my expectation that investment from Guyana too would be welcomed in Trinidad and Tobago.”

Dr. Rowley also sought to remind that when Guyana found itself in the grip of a serious economic crisis in 1981, it was Trinidad and Tobago that loaned it $98M. By 1996, that debt climbed to $536M and Trinidad was at the end of its oil boom. The Twin Island Republic desperately needed to be repaid but Guyana was still cash strapped. Rowley reminded this morning that the TT government took the decision to write off the debt.

He said, “But we are not holding that as any quid pro quo (a favour for a favour) now. We treated that as circumstantial and we maintain that we are willing to cooperate with Guyana. We hope to continue to travel this road together.”

While Rowley holds this sentiment now, in 1966 his views were different. As an opposition member at the time, Rowley was completely against the debt write-off. He had said that Guyana “picked the pockets of Trinidad and Tobago.”

But today, the TT Prime Minister is elated to have the MoU with Guyana so “both countries can benefit.”

President Granger said that the MoU is no secret and will be released to the public soon.

On October 1, teams from both countries would be meeting to execute projects coming out of the agreement