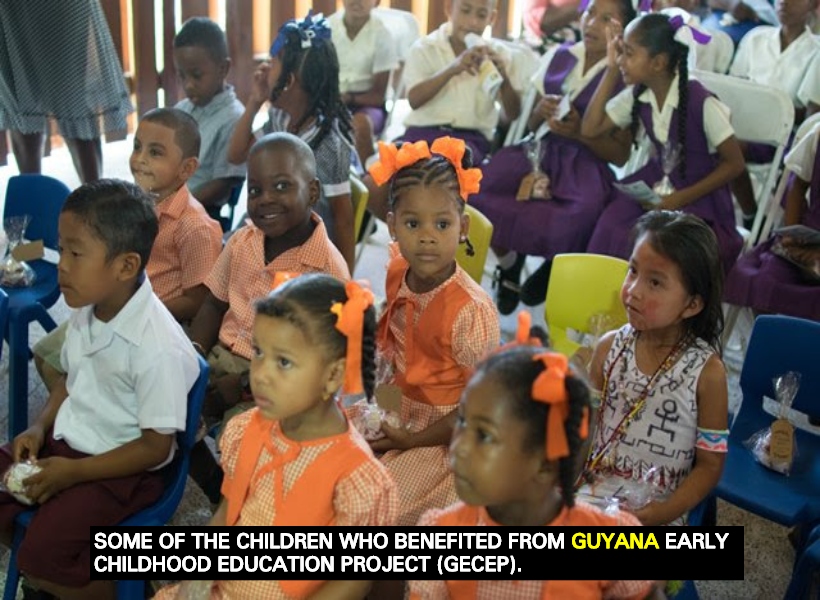 At the conclusion of the three-year project, literacy among hinterland children improved by 139.78 per cent while numeracy improved by 133.67. Students started the project with a literacy rate of 36.63 per cent in literacy and 37.53 in numeracy.

GECEP Project Coordinator, Quenita Walrond-Lewis said the strong finish is a testament to the mental shift in how early childhood education is treated.

“These children finished stronger quite possibly because our teachers were better prepared, our teachers had more interactive teaching, learning materials and they had the partnership of their parents and primary caregivers,” Walrond-Lewis said.

Yesterday, the Ministry of Education hosted a closing ceremony at the Umana Yana to celebrate the success of the project.

GECEP was launched in Bartica, Region Seven in 2015. The project sought to improve emergent literacy and numeracy outcomes for children at the nursery as well as Grade One levels in Regions One, Seven, Eight, Nine and riverain communities along the coast.

Minister of Education, Nicolette Henry, said the project’s success solidifies the need for national scale-up of certain components. She added that Early Childhood Education (ECE) resource toolkit, which was used in the project, will be provided to all coastland nursery schools by the end of the month. Minister Henry noted the kits have already been procured.

“There is also increased allocation of personnel and resources for consistent and ongoing monitoring and mentoring of in-service educators to ensure the good quality of education service delivery and deeper, more sustainable streamline and alignment without parents through community-based Parent Teachers Associations and the parent circles initiative,” Minister Henry explained.

GECEP was conducted in collaboration with the Global Partnership for Education and the World Bank.

The more than $355B (US$1.7M) project saw a significant portion of the funding being used to build the capacity of the trainers. There were 41 ECE Master Trainers who monitored and mentored some 526 in-service practitioners during the life of the project.

Some 750 ECE resource kits were procured and distributed which benefited some 8,000 children from Regions One, Seven, Eight, Nine and riverain communities along the coast. Over 200 primary caregivers benefited from tailored education.

The GECEP objectives were in alignment with the Ministry of Education’s five-year Nursery Education Action Plan and the Global Partnership for Education Strategic Plan 2012-2015.