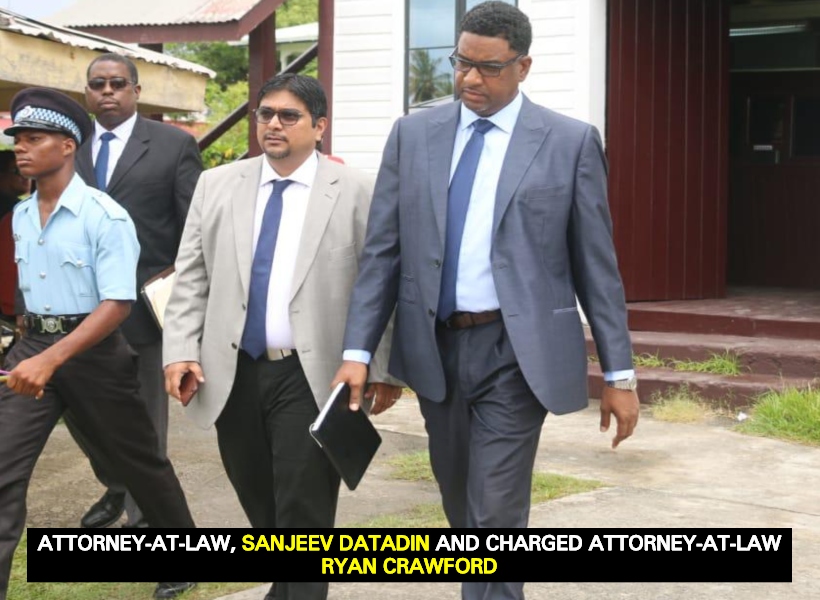 The Attorney-at-Law who took Facebook by storm, when a video of him verbally abusing a traffic officer surfaced, was today slapped with five charges.

To the charges, “Ryan F#*$ing Crawford,” pleaded not guilty after appearing before Magistrate Peter Hugh in the Vigilance Magistrates Court.

The Corentyne based attorney was represented by eleven lawyers with Sanjeev Datadin as the lead.

All the charges stemmed from an altercation between him and a member of the Guyana Police Force (GPF).

It is alleged that on September 13, 2018, at the Yorkshire Public Road, Mahaicony, East Coast Demerara, Crawford verbally abused a police rank after he was asked to produce his documents.

In the courtroom, Crawford pleaded not guilty to all the charges after they were read to him by the Magistrate.

While the Prosecution had no objections to bail being granted to the defendant, the Magistrate told the court that he is of the opinion that Crawford will return to court for his trial.

Crawford was released on his own recognizance (self bail) on all the charges.

He was also instructed to make his next court appearance on October 10.

It was reported that on the day in question, around 15:00 hrs, a traffic rank stopped the Attorney-at-law during a routine stop along the Mahaicony Public Road, East Coast Demerara.

Crawford allegedly “cuss out” the rank after he was asked to produce his documents.

Days after the “cuss out” Crawford issued an apology via Facebook for his behaviour towards the traffic cop during the routine traffic stop.  He, however, expressed that he was not sorry for questioning the policeman’s ‘arbitrary authority’.

“I am not trying to justify my behaviour. My language was not proper as an officer of the courts or as a member of the Bar of Guyana. I apologize for my language, but I’m not sorry for questioning arbitrary authority.”

In his apology, Crawford stated that it was his frustration that led to the excessive use of expletives to get his point across to the officer for what he alleges is an illegal stop, and that there were things said prior to the filming of the video.