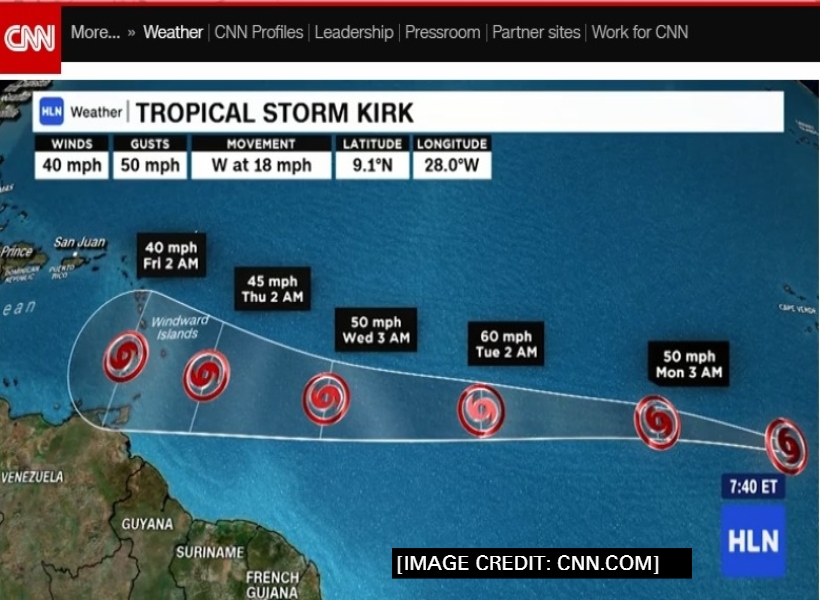 Guyanese should brace for heavy rainfall, thunderstorms and high winds in the coming days. This is according to information released by the Civil Defence Commission [CDC] which in an advisory issued today said that Tropical Depression Kirk which is slated to become a Tropical Storm within the next 21 hours would be passing close to the Low Coastal Plain of Guyana on Wednesday September 26, 2018.

According to Lieutenant Colonel Kester Craig who heads the CDC, the Commission and Hydromet Services will be monitoring the system and provide updates as they become available.

However, the National Hurricane Centre [NHC] has been issuing regular updates on the tropical depression. The NHC is the division of the United States’ National Weather Service responsible for tracking and predicting weather systems within the tropics.

Although the Agency reports that “There are no coastal watches or warnings in effect for the storm,” it has ascertained that “it is located at about 950 miles west-southwest of the southernmost Cabo Verde Islands and about 1,600 miles east of the Windward Islands in the Caribbean.”

Although slight strengthening is forecast during the next few days, it is possible that Kirk could degenerate into a trough of low pressure during the next day or two while it moves quickly across the tropical central Atlantic, it added.

A discussion from the NHC reads, “This forecast takes Kirk toward the Lesser Antilles in three to four days and interests there should monitor the progress of this system.”

It added that Kirk’s, “fast forward speed will likely limit the system from strengthening significantly during the next few days, so only little intensification is predicted.”

“The global models show a notable increase in westerly shear when Kirk reaches the eastern Caribbean Sea in about four days, and that should cause weakening and possibly even dissipation by the end of the forecast period,” NHC informed.