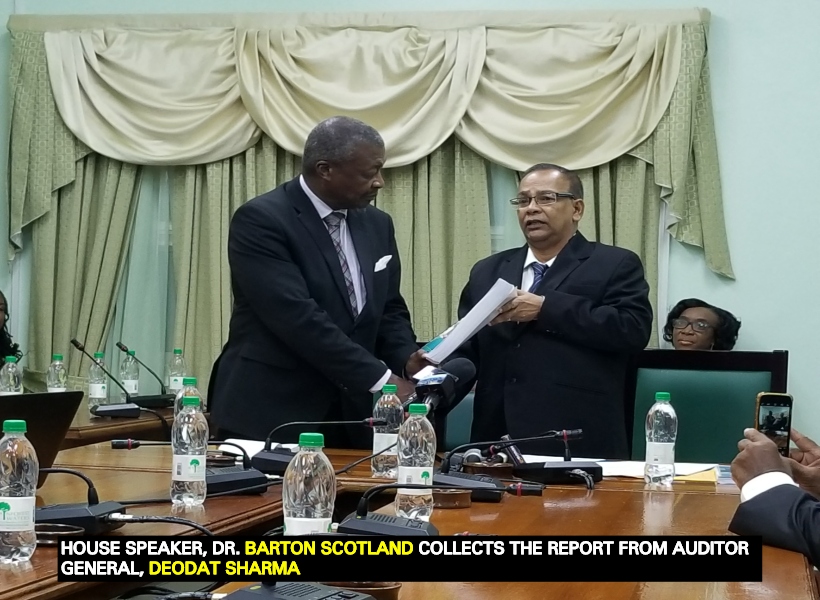 Auditor General, Deodat Sharma submitted to Parliament, today, his report on how the government spent taxpayer’s dollars for the year 2017. House Speaker, Dr. Barton Scotland accepted the report in Committee Room 1 of the Parliament. Sharma’s report usually captures a litany of financial transgressions of the various government arms and statutory institutions.

In his remarks to members of the press, Sharma said that the presentation of the report marks the eighth consecutive occasion that the Audit Office has been submitting its reports by the statutory deadline of 30 September, following the close of the fiscal year. He said that it captures areas of improvements as well as the financial misdeeds that occurred in several ministries.

The Auditor General said that this achievement reflects the realization of the Office’s objective of timely reporting of the results of its audits to the legislature and ultimately the public. He noted that the report will be laid in the National Assembly by the Speaker, at which time it becomes a public document. Sharma noted that this report would not have been possible without the hard working staff of the Audit Office. On this note, Sharma expressed sincere gratitude to the staff of the Audit Office, the Ministry of Finance, the Accountant General and Heads of Budget Agencies for their usual co-operation.

As the supreme audit institution, Sharma said that he and his team will continue to improve the operations of the office by having up-to-date and internationally accepted Auditing standards and methodologies; efficient and effective Operational and Human Resource Management structures and modern IT infrastructure and computer-assisted audit techniques and tools.

The Auditor General said that the aforementioned were all were made possible by the government of Guyana, as well as donors and partners. Sharma emphasized that the Office continues to strengthen its infrastructure, capacity, and capabilities.

He said, “We continue to have better communication between sub-offices and fostered the sharing of information in an efficient and cost-effective manner.”

In keeping with the theme of ensuring a “greener environment”, the Auditor General also revealed that his office implemented the use of the Audit Management Software; TEAMATE. This Software will guide the Audit Office in moving to a paperless environment.