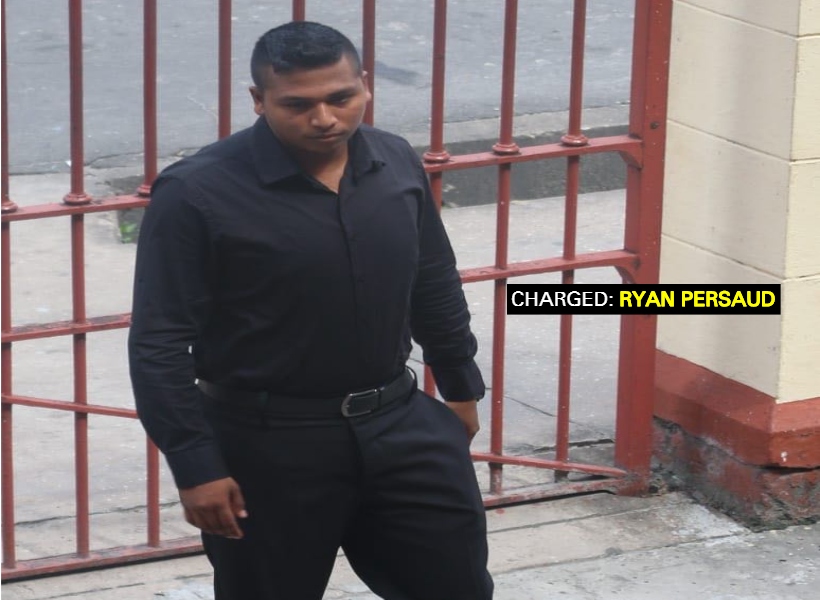 Facebook
Twitter
Google+
Pinterest
WhatsApp
One month after a serving member of the Guyana Police Force (GPF) failed a breathalyzer test following a fatal accident, he was today charged and granted bail on a causing death by dangerous driving charge.
Twenty- three- year-old Ryan Persaud of Kitty, appeared before  Senior Magistrate, Fabayo Azore who read the charge to him.
The charge stated that on September 1, 2018, at Nelson Mandela Avenue, Persaud drove Guyana Police Force minibus PVV 4652, in a manner dangerous to the public causing the death of Akemo Anthony.
Persaud pleaded not guilty to the charge after it was read to him in the Georgetown Magistrates’ Courts.
His Lawyer, Eusi Anderson, in an application to secure bail for his client, told the court that his client is a father of one and the sole breadwinner for his family.
He added that his client has been a serving member of the Guyana Police Force for the pass four years and is currently stationed at Impact Base.
Police Prosecutor, Simone Payne, made no objections to bail being granted to Persaud but asked that Persaud lodge his passport with the court until the hearing and determination of the trial.
The Magistrate, after listening to both sides, granted Persaud bail in the sum of $250,000. He was also order to lodge his passport with the court.
According to reports, on September 1, last,  around 11:40 hrs, Persaud was driving east along the northern carriageway of Mandela Avenue when Anthony was proceeding in the opposite direction on motorcycle CJ 511.
It was reported that Anthony made a sudden turn north into the path of the minibus in an attempt to cross into Back Circle Street but because of the short distance, the bus collided with the motorcycle.
As a result of the impact, the cyclist fell onto the roadway and sustained injuries about his body; he was rushed to the Georgetown Public Hospital Corporation (GPHC) in an unconscious state.
He later succumbed to his injuries whilst receiving medical attention.
Last month, Persaud appeared before a City Magistrate and was released on $25,000 bail after denying a charge of driving under the influence of alcohol.
The charge read that on September 1, 2018 at Nelson Mandela Avenue, he drove Guyana Police Force minibus PVV 4652, when his breath alcohol level exceeded the normal limit of 35 micro grams.
Persaud’s alcohol level in his blood, at the time of the accident, was 91 micro grams.
He was instructed to make his next court appearance on October 12 for statements.