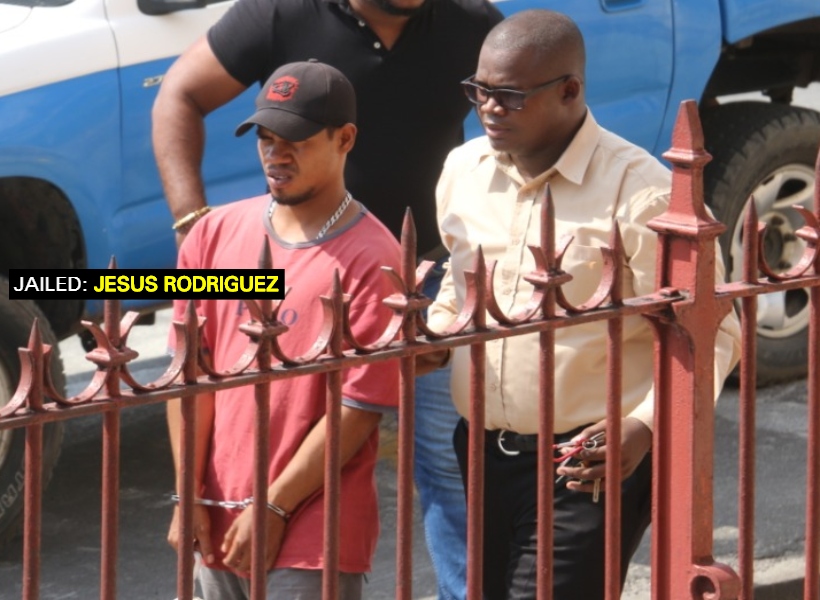 A Venezuelan, who told the court that he meant no harm when he decided to fire several shots in the air with an illegal gun, was this afternoon sentenced to four years imprison.

He was slapped with four gun related charges, but only pleaded guilty to two.

The first charge stated that on October 7, 2018, at Dukwari Backdam, in the Cuyuni,  River, Rodriguez had in his possession 17 9mm ammunition, without being the holder of a license firearm enforced at the time.

It was further alleged that on October 7, 2018, at Dukwari Backdam, in the Cuyuni,  River, he had in his possession one 9 mm semi automatic pistol without being the holder of licence firearm.

The third charge stated that on the same day and the same location, the foreigner had in his possession three .38 ammunition.

The last charge stated that on the same day and at the same location, Rodriguez had in his possession a one .38 revolver, without being a licensed firearm holder.

The 27-year-old pleaded guilty to the latter two charges after they were read to him by the Magistrate.

Rodriguez,  who spoke through an interpreter,  told the court he came across to Guyana to collect some money from someone. He added “ Normally when I drink I does fire shots in the air. It’s a form of celebration without harming anyone. I never had dealings with the law in Guyana or Venezuela.

When asked by the Magistrate why he had no license to carry a firearm, the man stated that in order to get a firearm license in Venezuela, you have to have a registered business, hence he told the court he decided to buy one illegally.

The man then asked the court for forgiveness. A teary Rodriguez stated “ I would clean the streets of Guyana, just gave me a chance. I am sorry for what I did.”

Facts presented by Police Prosecutor Deniro Jones stated that on October 7, 2018, the defendant was at a hotel in Dukwari Backdam, in the Cuyuni,  River, and the hotel owner complained to two police ranks that the defendant was in a room shooting at the building.

The officers then conducted a search on the defendant and they found the two weapons along with matching rounds.  He was told of the offences and he admitted, hence charged.

The Magistrate, after listening to the Prosecutor facts, sentenced Rodriguez to two years on each of the charges he pleaded guilty to. He was also fined $100,000.

The sentences will run concurrently.