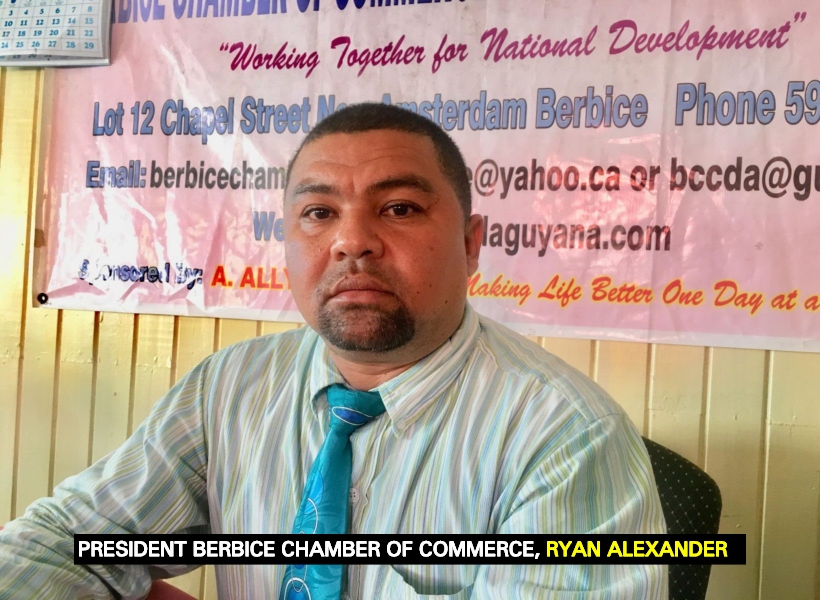 The private sector in Berbice is opposed to the proposed Berbice Bridge fare increases set for November 12, 2018, and is calling for all the relevant stakeholders to unite and prevent this from occurring.

The businessmen anticipate across the board increases in the price for items as well as a contraction of the economy and increased unemployment due to many businesses being forced to reduce staffing, once this happens.

In fact, Berbice Chamber of Commerce President, Ryan Alexander believes that the proposed increases will create chaos and bring untold hardship to Berbicians.

He said, “ …the proposed price increases, I believe it is about 300 plus percent, is going to do the Berbice economy great harm…so that rise in price will definitely create havoc and if it is implemented, will create more pressure on the Berbice economy.”

Alexander is calling on the Opposition, the Government and the Private Sector to have a sit-down and discuss a way forward. He posited that the increases will not only affect Berbicians but every Guyanese that uses the bridge.

President of the Central Corentyne Chambers of Commerce Ponai Bhigroog who echoed similar sentiments believes the proposed price increase in the bridge fares will also see “significant increases across the board” for commodities coming in and out of Berbice.  He too is calling on the relevant stakeholders to revisit the proposed increases.

Regional Chairman, David Armogan labeled the proposed increase as “extremely ridiculous” and anticipates the closure of many small businesses especially in the agricultural sector since they usually send their produce to Georgetown to be sold. He opined that due to the increase in the price for crossing and freight they will be forced out of business since other Regions won’t have that hefty cost attached for transportation.

Meanwhile, Mohindra Persaud Of the Upper Corentyne Chamber of Commerce told the media that the Berbice Bridge Company Incorporated (BBCI) needs to look at other business models from which they can try to recuperate their investment.  He too is optimistic that the government will intervene since he does not believe the current administration will allow this to occur.

Many residents especially those traveling frequently are already questioning how they will cope with the over 400 percent proposed increases.

Following the announcement by BBCI the Coalition Government has remained resolute that it will not allow undue hardships to be brought on Guyanese with the “unconscionable” increases.

This was communicated by Minister of Public Infrastructure, David Patterson during a press conference hosted on Tuesday, October 16, 2018.