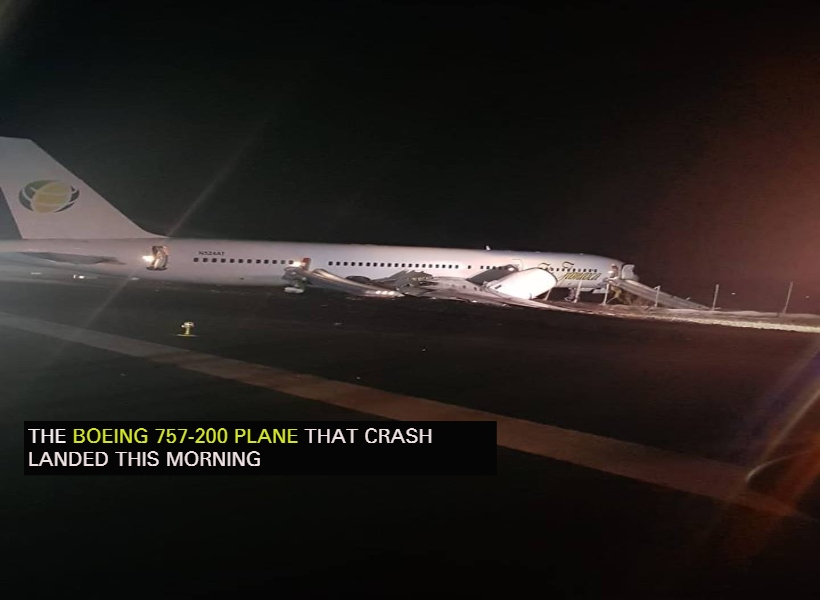 As investigation continues into the accident this morning at the Cheddi Jagan International Airport, Director of the Guyana Civil Aviation Authority (GCAA), Egbert Field, has confirmed that the black box of the Fly Jamaica aircraft—that crash landed—will be sent to the United States for decoding.

At a press conference this morning, Field said that the black box, which is made up of two critical pieces of equipment—the flight data recorder and a cockpit voice recorder—is to be sent to the National Transportation Safety Bureau (NTSB).

The recorders are installed in planes to help reconstruct the events leading to an accident. The Cockpit Voice Recorder records radio transmissions and sounds in the cockpit, such as the pilot’s voices and engine noises while the Flight Data Recorder monitors parameters such as altitude, airspeed and heading.

The GCAA’s head said that both the equipment have been secured and will be sent to the NTSB as early as Monday via a shipping company.

In addition to this, this news agency was told that NTSB has identified a representative to work alongside local investigators on the accident. That representative, according to Field, will come to Guyana very soon to revisit the crash site and conduct additional probe.

As it is presently, the GCAA is photographing the scene and doing measurements. When the agency is finished, the plane will be handed over to Fly Jamaica for removal.

Other persons suffered injuries when they were deplaning using a slide. None of the injuries are life-threatening.

Early this morning, a Boeing 757-200 plane—destined for Toronto, Canada with 118 adults, two infants and eight crew members—crash landed at the CJIA. The passengers included one American, 82 Canadians, 35 Guyanese, one Pakistani and one Trinidadian.

Public Infrastructure Minister, David Patterson confirmed that the plane departed Guyana at 2:53 am and at 2:21 minutes, the pilot reported hydraulic problem and requested permission to return and land on the airstrip.

In July, 2011 a Caribbean Airline Boeing 737-800 aircraft with 163 passengers overran the runway at the CJIA and broke into two. Seven persons were injured.