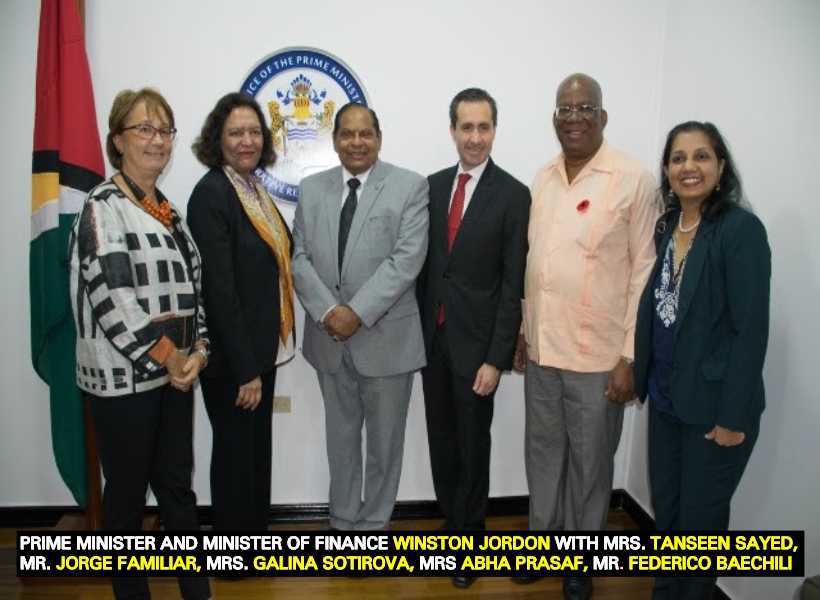 Prime Minister, Moses V. Nagamootoo and Finance Minister, Winston Jordan recently held discussions with a high-level, five-member team from the World Bank regarding assistance for the development of the oil and gas sector.

Led by Mexican-born Mr. Jorge Familiar, Regional Vice-President for Latin America and the Caribbean region, the World Bank assured support to Guyana in the area of capacity building.

Familiar shared the recent dismal experiences of a few regional states that depended on oil wealth, and stressed that Guyana would need solid governance systems to avoid pitfalls, and to protect and beneficially spend anticipated revenues.

In welcoming the team to Guyana, Nagamootoo emphasized the efforts of the Coalition Government in promoting open, democratic, multi-party governance in Guyana, as well as the willingness to put mechanisms in place to combat sleaze by public officials and accountability for public property.

He explained the many innovations in the democratic architecture of Guyana over the past three years, and invited the World Bank to partner with the Government to strengthen these institutions and to build human capital to manage the new economy.

The Prime Minister, who was performing the functions of the President, referred to the Green Paper for a Natural Resources Fund, which was tabled in the National Assembly; and the crafting of a Green State Development Strategy, to provide a generational vision for the future oil-producing Guyana. He noted that the Fund policy is underlined by stringent fiscal rules to guide the use of petroleum resources.

Mrs. Tahseen Sayed, reminded that towards this end, the World Bank has approved a US$35 million development policy credit to better prepare the country to benefit from its oil and gas reserves, and to support Guyana’s effort to strengthen financial sector development and fiscal management. Another line of credit is also in the pipeline.

The World Bank team is expected to meet other key government officials and other stakeholders this week.