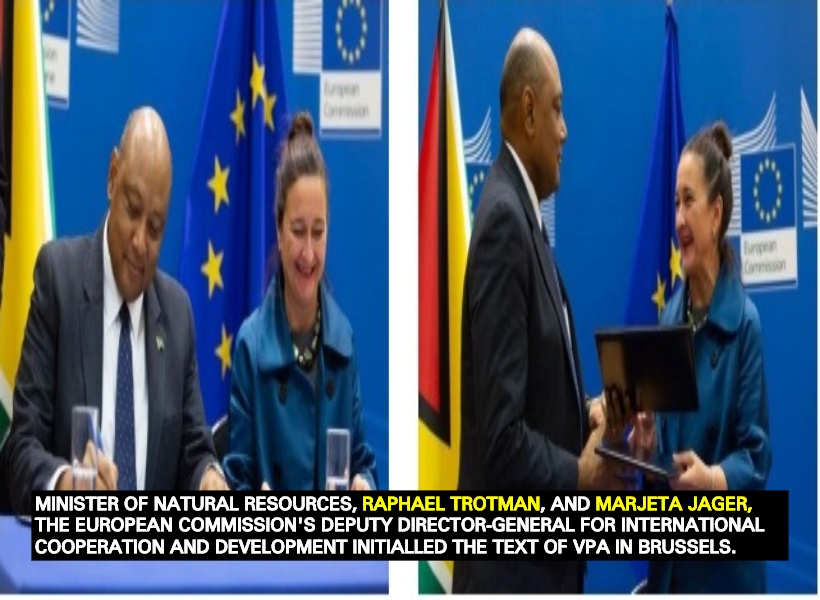 Guyana and the European Union (EU) have concluded a six-year process of negotiations towards a Voluntary Partnership Agreement (VPA), which aims to improve the application of forest laws, strengthen forest governance and promote trade in legal wood products.

Representatives of Guyana and the EU initialised the VPA on November 23 in Brussels, ahead of each side signing and ratifying the agreement. Guyana, with its clear forest vocation, has an area of 16.5 million hectares of natural forest; 5.5 million hectares are devoted to forest management, which represents 35 percent of the forests, according to data provided by the Guyana Forestry Commission (GFC).

VPAs are among the elements of the EU Forest Law Enforcement, Governance and Trade (FLEGT), which the EU adopted in response to the global problem of illegal logging and associated trade. The Guyana-EU VPA will enter into force after both sides have ratified it, triggering a period in which Guyana will develop a system for verifying the legality of its timber products and will implement its other VPA commitments.

The Food and Agriculture Organization of the United Nations (FAO) is helping to implement the FLEGT Action Plan in 25 tropical countries in Asia, Africa, and America. This programme, called FAO-EU FLEGT, implemented by FAO and funded by the EU and the governments of Sweden and the United Kingdom, works actively in Guyana to establish several initiatives that encourage forest sector actors to use forests in a legal and sustainable way, facilitating in parallel the negotiation and implementation of the VPA. Guyana is one of 15 countries that was negotiating a VPA with the EU and has given it a high political priority at the national and sectoral levels.

During the negotiations, representatives of indigenous peoples, agro forestry communities, the private forestry sector, and government agencies were consulted. These groups also benefitted during the VPA negotiations from donor-funded capacity-building projects.

“The success of FAO’s support to the FLEGT process in Guyana is based on facilitating a multi-stakeholder dialogue or, in simple words, to get people and institutions to talk with each other. The vision of encouraging the dialogue is also visible in the variety of organizations FAO partnered with,” said Claus-Martin Eckelmann, FAO Regional Forestry Officer for the Caribbean.

He added, “Crosscutting through the project is the spirit of getting people and agencies who have not had much contact with each other to communicate and to address the problems which require the collaboration of multiple agencies and institutions.”

The EU is a major global market for timber and timber products, with about 500 million potential consumers, a key market for timber products from Guyana. In 2016, the value of Guyana’s wood and wood product exports to the EU was US$2 million, which amounted to five percent of Guyana’s total wood and wood product exports, according to the Chatham House Resource Trade Database.