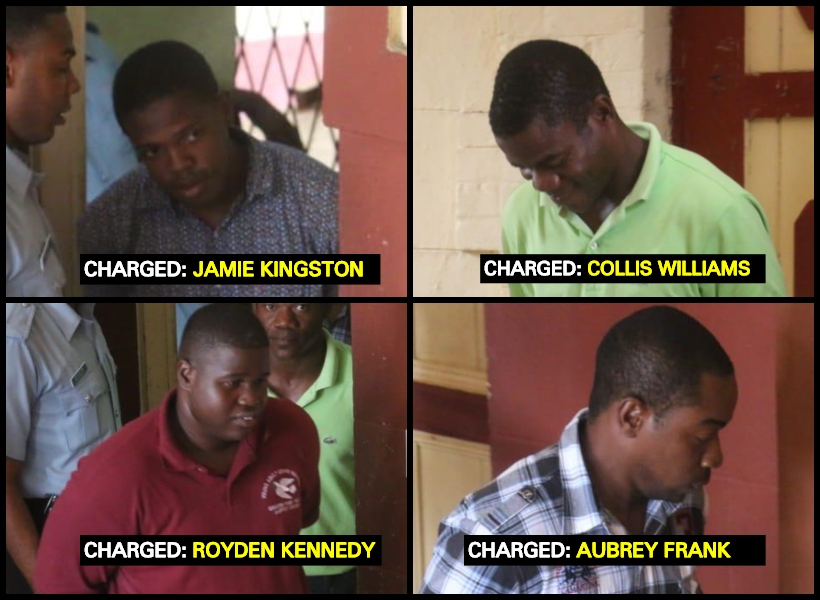 Four firefighters were this afternoon hauled before a City Magistrate after being accused of stealing from passengers of a Fly Jamaica aircraft which crashed-landed at the Cheddi Jagan International Airport (CJIA) earlier this month.
Those charged are Aubrey Frank, 30, of Soesdyke Linden Highway; Jamie Kingston, 30, of Lodge Georgetown; and Royden Kennedy, 27, of Timehri, East Bank Demerara.

It is alleged that on November 9, 2018, at the Cheddi Jagan International Airport, Timehri, East Bank Demerara, they had in their control a quantity of articles, including perfumes, laptops, chargers and a freshener, all suspected to be stolen or unlawfully obtained.

The men all pleaded not guilty to the charge after it was read to them by Chief Magistrate Ann McLennan in the Georgetown Magistrates’ Courts.

Frank was represented by attorney-at-law Clyde Forde, who told the court that his client has been a member of the Guyana Fire Service for the past four years and is the sole breadwinner for his family.

Attorney-at-law Eusi Anderson, who represented Kingston, stated that his client has been a member of the Guyana Fire Service for the past 11 years and has never been charged.

Meanwhile, Kennedy was represented by attorney-at-law George Thomas who, in a successful bail application for his client, stated that his client has been a fireman for over four years and has never been placed before the courts for any offence.
However, Police Prosecutor Gordon Mansfield made serious objections to bail being granted to the defendants on the grounds of the serious nature of the offence and the circumstances in which it occurred.

The Magistrate, after listening to both sides, released the trio on $100,000 bail each.

Soon after they were taken out of the courtroom, Collis Williams, 37, of Coverden, East Bank Demerara, was in the prisoner’s dock where he was charged for stealing two phones belonging to the pilot of the crashed plane.

It is alleged that on November 9, 2018, at the Cheddi Jagan International Airport, Timehri, East Bank Demerara, he stole two cellular phones valued at $146,000, property of Basil Ferguson.

He too denied the charge after it was read to him by the Magistrate.

His lawyer, Clyde Forde, in a successful bail application for his client, told the court that his client has been a fireman for the eight years. He too was released on 100,000 bail by the Magistrate.

Conditions of the bail are that the firemen, who have all been interdicted from duty, lodge their passports with the Clerk or Court and report every Friday to the officer in charge at the Providence Magistrates’ Courts. They were all instructed to make their next court appearance on December 12.

It was also reported that one of the firemen admitted to taking one of the gadgets and has since returned it.
According to information received, the items were removed when the firefighters were assisting passengers off the plane.