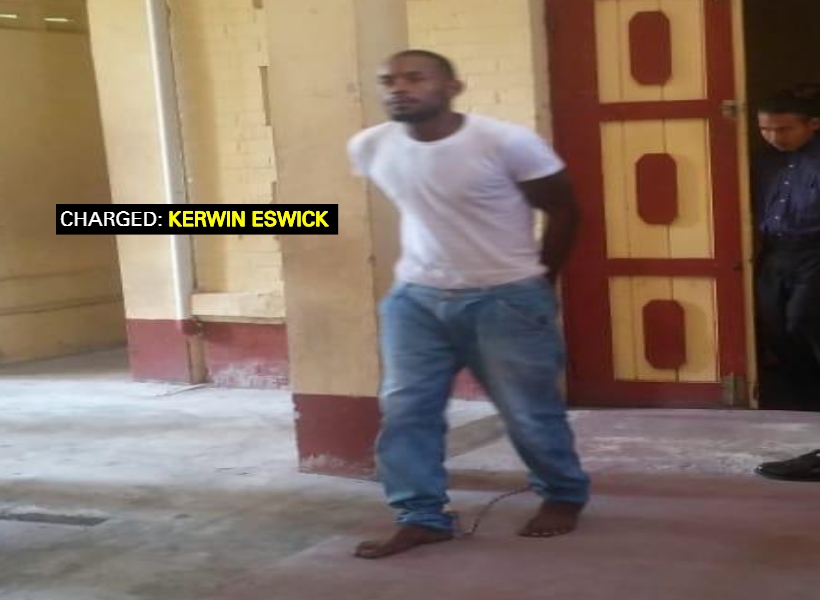 Two police officers are now nursing bite wounds about their bodies after they were viciously attacked by a man while trying to arrest him.

Kerwin Eswick, 24, of South Amelia’s Ward, Linden, appeared this morning before Chief Magistrate Ann McLennan, where three charges were read to him.

The first charge stated that on October 21, 2018, at Central Amelia’s Ward, Linden, he inflicted grievous bodily harm on Sharon Clarke, his girlfriend.

It was further alleged that on December 11, 2018, at South Amelia’s Ward, Linden, he assaulted Detective Constable Keston Peters with intent to prevent lawful apprehension of himself.

The last charge stated that on December 11, 2018, at South Amelia’s Ward, Linden, Eswick assaulted Police Constable Shaquile Mackintosh with intent to prevent lawful apprehension of himself.

He pleaded not guilty to the charges after they were read to him in the Georgetown Magistrates’ Courts.

Police Prosecutor Gordon Mansfield had no objection to bail being granted to Eswick but asked that conditions be attached.

The court heard that, on October 21, Eswick and Clarke had an argument and she stopped a taxi and entered. However, an irate Eswick pulled the woman out of the car, causing her to receive injuries to her right leg.

The matter was then reported to the police. On December 11, police ranks were on patrol duty when they saw him in the vicinity of South Amelia’s Ward.

The ranks then exited the patrol van and proceeded to arrest Eswick who was standing at a corner. He dealt the ranks several bites and punches about their bodies.

Eswick then managed to take away one of the rank’s handcuffs and hit them about their bodies.

After several minutes of fighting, the officers finally got to arrest Eswick and placed him in the police van.

He was then taken to the Linden Police Station, hence, charged for the offence.

The Magistrate, after listening to the Prosecutor’s facts, released Eswick on $20,000 bail.

He was instructed to make his next court appearance on January 7, 2019 at the Linden Magistrates’ Courts.