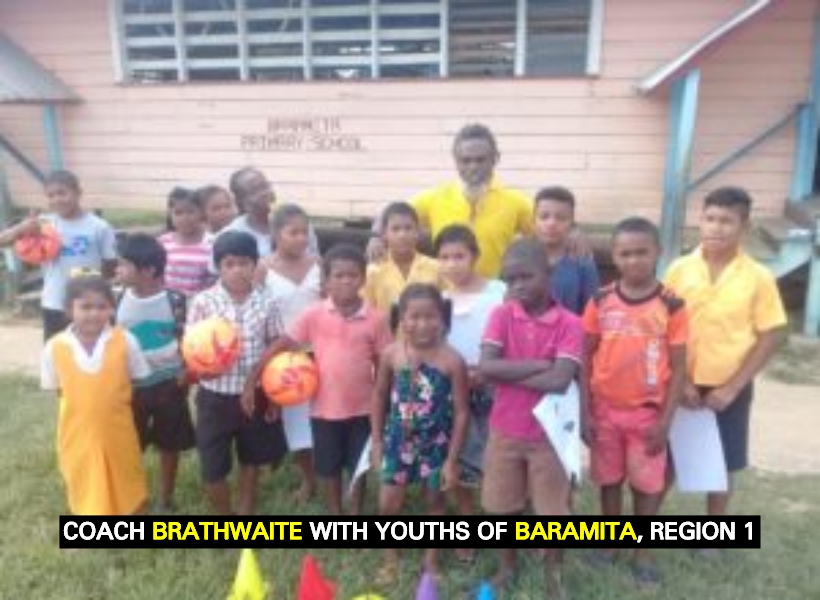 The youths of Baramita, Region One and their community at large are having their social problems addressed through the deployment of one of the Department of Sport’s most experienced coaches.

The Department of Sport, in a press release, explained that Mr. Gordon Brathwaite, one of Guyana’s world class footballers, “was sent to the community to engage its youths on healthier ways of channeling their anger, frustration and boredom.”

Coach Brathwaite, known in the field as the ‘Ultimate Warrior’ has been interacting with the young people of Baramita, since Thursday, the Department said.

“I genuinely believe that sports can solve many of the problems facing the people of Baramita, and I look forward to seeing positive changes very soon,” Mr. Brathwaite said.

And indeed, the initiative has been yielding results thus far. According to Brathwaite, the engagements have led to the formation of a Baramita Sports Club, headed by a five-member executive body. This body, Brathwaite said, represents “all sections of the society.”

“It has a teacher; a police officer; a young, vibrant, talented youth leader; a very successful businessman; as well as the Deputy Toshao of the village,” Mr. Brathwaite explained.

Meanwhile, Coach Brathwaite applauded the efforts of Minister of Social Cohesion, Dr. George Norton, who he believes recognises the positive impacts that sports can have on a person’s overall life.

“From the response that I have gotten, I believe that sports can really help the people of Baramita. The youths have potential and I am glad that the Department of Sport took this initiative to ignite a sports presence in that particular community,” Mr. Brathwaite was reported as saying.