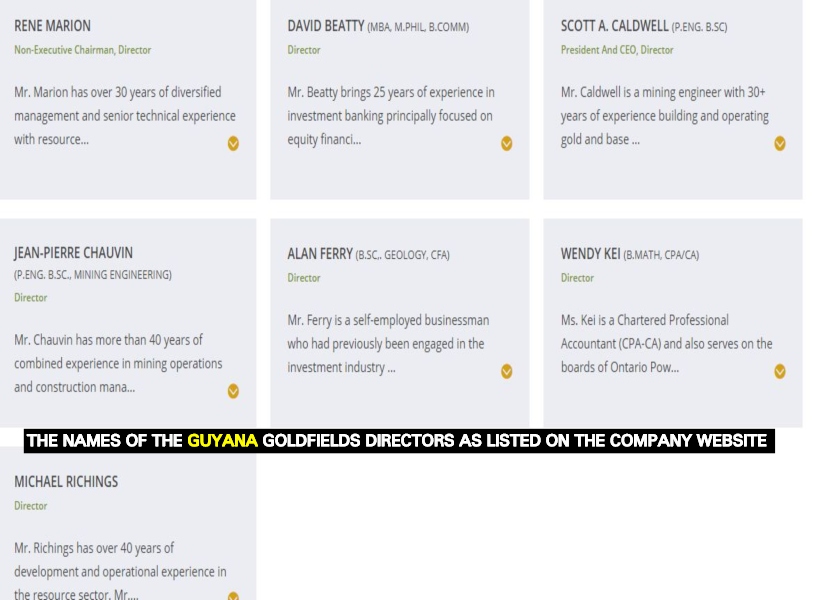 The Board of Directors for Guyana Goldfields Inc. is being accused of losing over CDN$1B which is around US$733M in shareholder value accumulating since 2016.

As a result of this, a group of concerned shareholders is calling on the local office to have the Board be replaced immediately by competent individuals.

Specifically, Northfield Capital Corporation’s Robert Cudney, Donald Ross, Gretchen Ross and Patrick Sheridan, who own five percent of the shares of the Canada based company, called for a meeting of all shareholders for the purpose of replacing the Board of Directors with one that is capable of fixing performance issues, leading a share price recovery, and executing a value-maximizing transaction.

The concerned shareholders also want Guyana Goldfields to immediately establish an Ethics Committee to guide and ensure the principled conduct of the Company’s business, establish a special committee to undertake a strategic review of the company’s finances and engage a leading Canadian bank as financial advisor to assist with the review.

The Shareholders said that if the meeting is not held immediately, then at least no later than March 12, 2019.

In a letter seen by this news agency, Sheridan, who served as former Executive Chairman and former Director of the Company, complained that the current Board has “made a series of seemingly irresponsible and misleading statements and generally questionable decisions that have put Guyana Goldfields’ share price into a freefall.”

The former Director added, “Their track record shows every decision they make further compounds the value destruction.  While shareholders have lost over CDN$1 billion in value, the Board has continued to reward itself handsomely and has made no changes to the operational management of the Aurora Mine.”

He also emphasized that the path for shareholders to recoup the value of their investment is clear: optimize operational performance, repair the relationship with the Government of Guyana, turn the share price around and execute a value-maximizing transaction.

Several local and international industry authorities were formally alerted of the ensuing issue via the said shareholders.