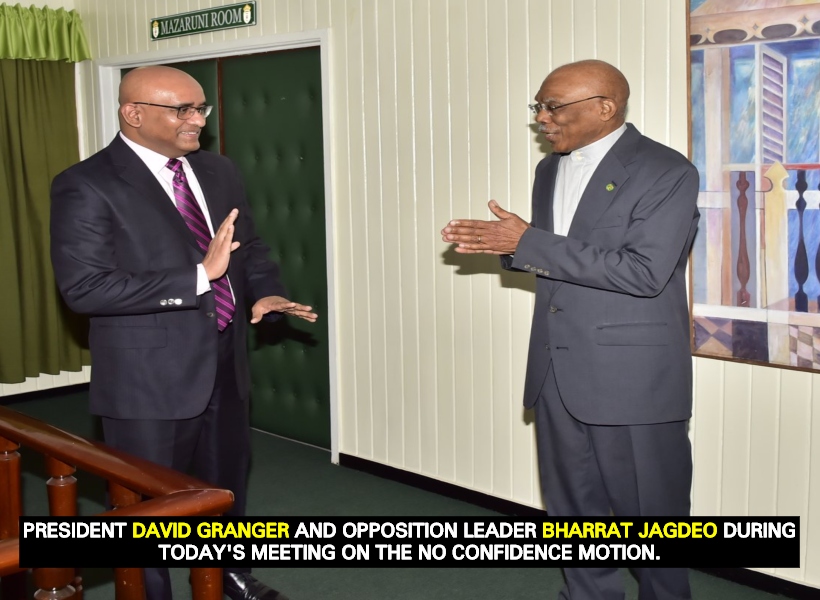 Even though Opposition Leader, Bharrat Jagdeo, insisted that the ruling of the legislature to the effect that the No-Confidence Motion was successfully passed, the Granger led administration will continue to pursue legal action regarding its validity.

Given the government’s determination in this regard, both President David Granger and Jagdeo have agreed that they will call on the courts to give the matter an expeditious hearing.

Jagdeo revealed this new development a few hours ago to media operatives as he provided a detailed update on his meeting with the Head of State this morning.

Since the APNU+AFC Government is insisting on taking the matter to court, Jagdeo said he reminded Granger that the matter could be dragged out for years.

“I explained to him that this could take forever. What if at the end of two years, the court says that we are right? You can’t get that time back. So I said to him that we should ask the court to hear this matter continuously. This is provided for in the law,” expressed the former Head of State.

Jagdeo said that since the President is now on board with this perspective, it would be incumbent on the courts to pay heed to the need to hear the matter expeditiously. The Opposition Leader said that, in a yet to be released joint statement, both parties will speak on the approach to be taken to have the case heard before the courts as quickly as possible.