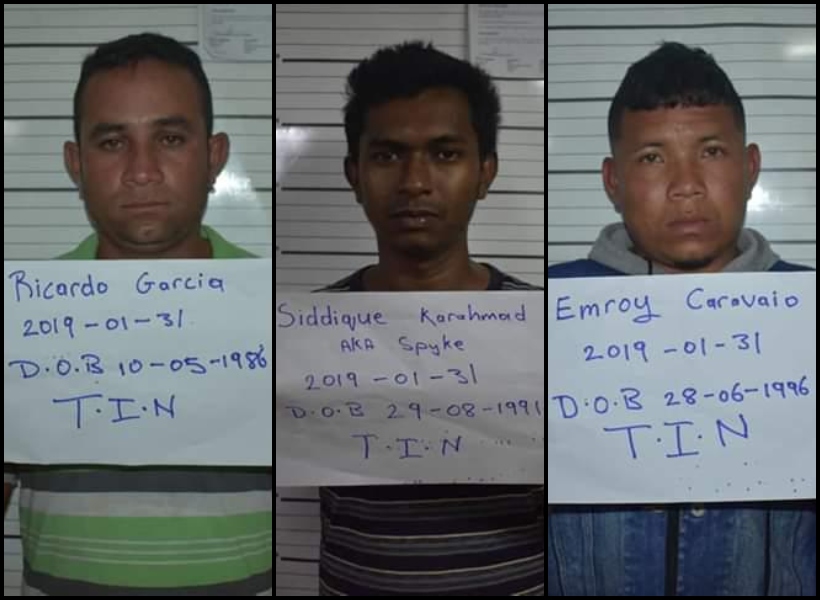 Two men and a Venezuelan who officials say hatched a plan to traffic a quantity of marijuana were late last evening busted by Custom Anti-Narcotics Unit (CANU) ranks.

The trio was arraigned before a Magistrate this morning.

The three men, Ricardo Garcia, 32, a Venezuelan; Emroy Carvaio, 20;and Siddique Karahmad, 27, all appeared before Magistrate Zamilla Ali-Seepaul in the Leonora Magistrate’s Court.

The charge against them stated that on January 31,2019, at Vergenoegen, East Bank Demerara, they trafficked 32.05 kilograms of marijuana.

The men all denied the charge after it was read to them.

According to reports, Garcia while being in Venezuela made contact with Carvaio and asked him to supply the drugs for him.

Carvaio then contacted Karahmad, who is a taxi driver, and asked that he transport himself and Garcia who came to Guyana to collect the drugs.

CANU Prosecutor, Konyo Sandiford told the court that following information received, CANU ranks went to Vergenoegen where they kept the men under close surveillance for a period of time.

After the men were all in Karahmad’s vehicle, the officers went and arrested them.

A search was then carried out and several parcels of marijuana were found in the vehicle.

The men were then escorted to CANU headquarters and later charged.

The Prosecutor opposed to bail being granted to the defendants citing that they have overwhelming evidence against the men.

The Magistrate after listening to the Prosecutor remanded the men to prison until February 18, 2019.