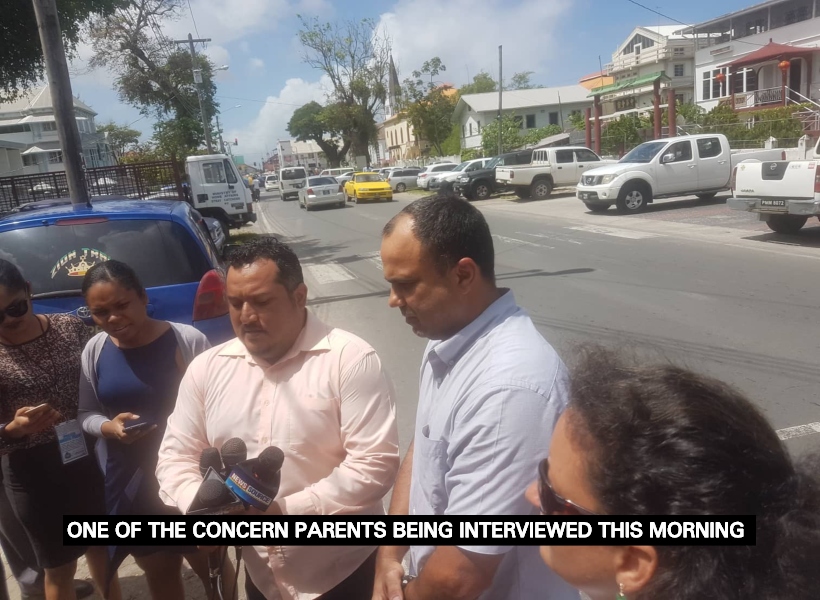 This morning, a number of parents, whose children attend School of the Nations, protested in front of the Ministry of Public Security on Brickdam, Georgetown demanding that more be done to find the perpetrator(s) who threatened to bomb the institute and several other schools in Georgetown.

During the demonstration, the parents offered a $1M reward for any information which would lead to the arrest of the individual who has been making the threats via a social media account called, “Nations Trollololololo.”

The threats started last week after the Director of the school, Dr. Brian O’Toole, was shot to both arms in what is believed to be an execution attempt. The attacker was inside Dr. O’Toole’s Bel Air Promenade, Georgetown home.

Police believe that the perpetrator might be someone who has an old grievance with the school and its staffers.

Similar threats were issued to Bishops High School and Queen’s College. This morning, the social media user posted about two bombs being planted in haversacks at the University of Guyana. This resulted in the cancellation of classes.

During the protest action, the parents indicated that officials at School of the Nations have put security measures in place since the threats to protect the students from anyone who would want to do harm. However, they are upset with how the Ministry of Public Security has handled the situation.

They claimed that it will soon be two weeks since the threats were issued and the police have not found the perpetrator as yet. In fact, the irate parents said that the individual who had previously issued threats on the life of President David Granger was arrested in just a matter of days.

“Such serious threats have been made and no Government official has come out to address the issue or tell us the status of the investigation,” a parent of a Third Form student lamented.

Meanwhile, a police source who is familiar with the investigation said that ranks are closer to finding the suspect(s) behind the Facebook post. The ranks are being assisted by the Guyana Telephone Telegraph Company (GTT).