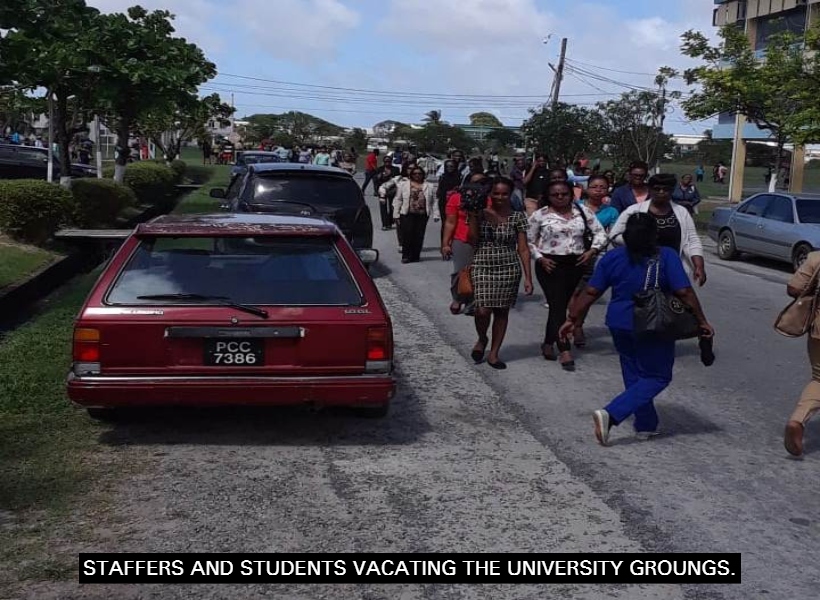 Classes came to an immediate halt at the country’s national university, the University of Guyana (UG), when word of bombs being planted on its Turkeyen campus surfaced.

Reports suggest that the bomb scare is linked to similar threats that have been issued against city secondary schools in recent days.

Based on information being circulated on social media, an individual referring to him/herself as “KIRA” in a post warned that “calls were made to several people issuing a warning!!!”

“They have planted two bombs in haversacks in the University of Guyana. Secure the students! Get them out. Please do not IGNORE This!!!”

The post continues, “Please do not ignore this!!! If my body is found it is because I spoke out.”

A number of students were seen scurrying off of the Turkeyen campus just after noon when this publication visited and reports suggest that staffers were also being advised to vacate the grounds too.

When contacted Public Relations Officer, Ms. Paulette Paul said that indeed the university was reacting to claims of a bomb scare. She divulged that the institution’s security detail was at the time “sweeping the grounds” in order to ascertain the authenticity of the threat. She, however, noted that additional information on the state of affairs will be forthcoming as it becomes available.

She referred this publication to the university’s Facebook page where a statement captioned “Bomb threat at Turkeyen Campus” reads “The University of Guyana Turkeyen Campus has been evacuated due to bomb threat that was received at the Alberttown Police Station, Forth and Albert Street, Georgetown at 12:40 h on Tuesday, February 5, 2019.”

It continued, “According to Vice-Chancellor Ivelaw Lloyd Griffith, the action was deemed necessary as a precaution, and out of safety concerns for the students and staff members who would use the facility during this time.”

Further it was revealed that “All classes for the rest of the day have been cancelled and Anyone with information regarding the bomb threat is encouraged to contact the Safety and Security Officer on 623-9979. This includes sightings of packages, vehicles or any situations which seem suspicious.”