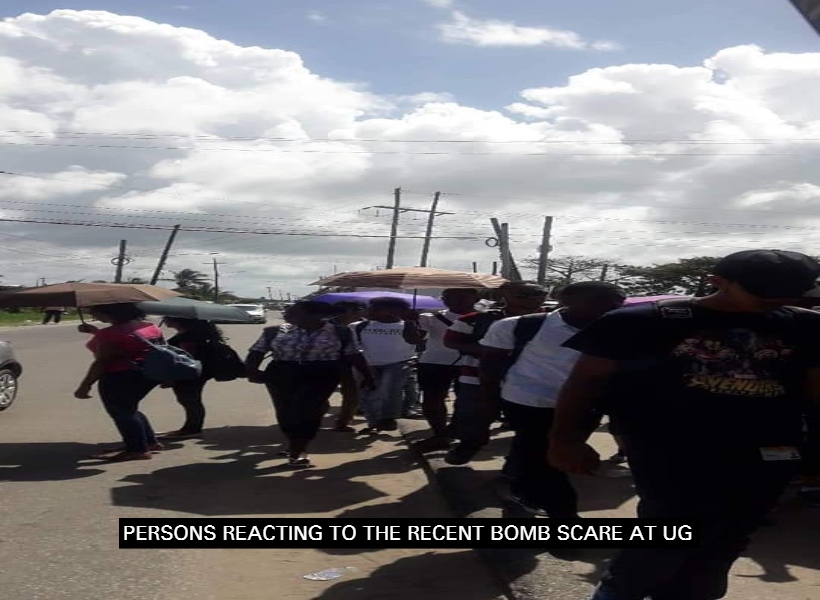 Not willing to subject neither students or staff to a possible bomb threat, the administration of the University of Guyana (UG) has taken the decision to cancel all classes and administrative procedures until Monday February 11, 2019, despite receiving the “all clear” from the Guyana Police Force.

This is according to a statement issued today by UG. An official from the institution’s Public Relations Department in an invited comment this morning said that the development comes on the heels of a second bomb scare threat which the administration learnt of late yesterday.

Moreover, the university in a statement said, “All members of the University and all members of the public are advised that the Turkeyen campus will be closed to the public, students and non-essential emergency University personnel for the remainder of this week to enable a comprehensive assessment of the situation following a bomb threat for the second day in succession.”

The statement continued, “Officers of the Police Force and the Fire Service conducted a thorough search of the campus on Wednesday afternoon. No explosive of any kind or suspicious object was found during this search.”

It was noted further that the closure of the campus will enable the Administration, staff and student leaders to review the situation and enhance preventive and responsive measures for such threats. Given the plans for the extensive scrutiny of the buildings and surrounding areas of the campus, the statement said that “classes and full operations will resume on Monday [February] 11, 2019.”

It is believed that the bomb threat situation is linked to similar threats made at a few city secondary schools, including the privately operated Nations Secondary School whose Director was shot multiple times by an assailant suspected to be a former student. Police are probing the shooting and the threats that have been made against the educational institutions.

Meanwhile, the Guyana Police Force (GPF) in its statement issued this morning said following investigations into the recent events where schools and UG received bomb threats “there is no significant threat.”

“Our investigations have revealed so far that students either by themselves or with other persons decided to be mischievous and endeavored to disrupt the existing peace and calm in society and specifically in the education sectors.”

It should be noted, the Police statement added, that the Force through the Commissioner of Police and other dedicated officers has taken all the necessary actions to date as a responsible organisation should in relation to the situation. To this end, it was noted that the Crime Chief and a team of officers last evening met with the Vice Chancellor of UG, Professor Ivelaw Griffith, as well as other senior functionaries including the Public Relations Officer, Ms. Paulette Paul, where the situation was assessed. “They were advised that the situation arose from mischievous students…therefore there is no need for panic or any undue concern.”

Nevertheless, the Force said that it continues to investigate and the arrest and detention of persons is very much imminent. The Force also noted that any further development will be similarly communicated even as it reminded that persons to “desist from so disrupting the education sector and by extension the calm society, lest they face arrest and criminal charges.”