Home News “Threats will not deter us” – UG Unions 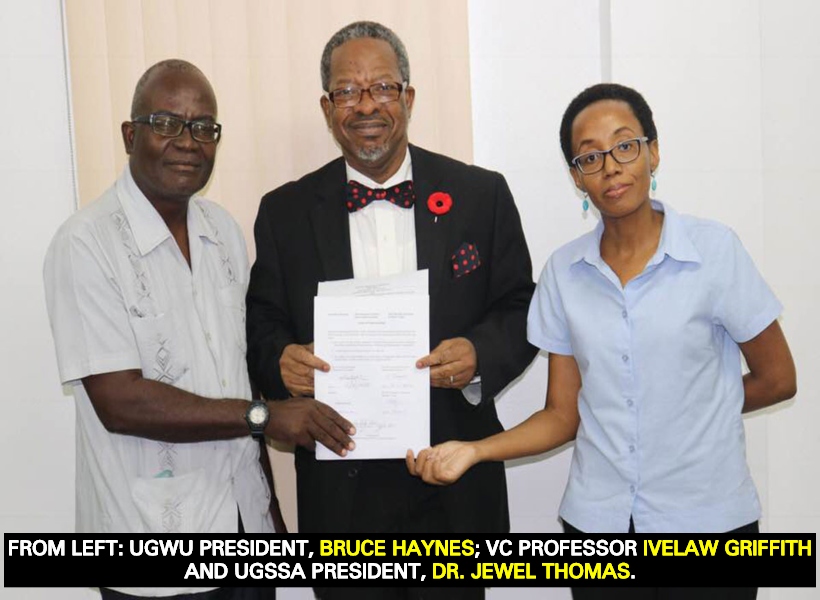 The staff unions of the University of Guyana [UG] have said they are not prepared to subject themselves to tyranny.
The unions — the UG Workers Union (UGWU) and the UG Senior Staff Association (UGSSA) — intend to fight to the very end for the well-being and interests of its over 1,000 full-time and part-time staffers, and also the well-being and interests of the over 7,000 students of the University, they have said. “As employees, as taxpayers and as citizens, we need to know that the national resources being given to the University are being spent in a way that brings the greatest good to staff and students. We would like the questions we have answered by way of a forensic audit, that will help us to determine the true financial situation of the University,” said the Unions in a joint statement issued today.

This development comes on the heels of protest action orchestrated by the unions which saw calls being made for a forensic audit into the financials of the tertiary institution.

In their statement, the unions recalled that on Tuesday they attended a meeting called by the Chief Labour Officer, Mr. Charles Ogle, in response to a request by the UG administration. The chairpersons (Presidents) of the University Unions, Mr .Bruce Haynes (UGWU) and Dr.Jewel Thomas (UGSSA) attended the meeting at the Department of Labour, Ministry of Social Protection.

It was revealed that UG’s administration indicated that they wished to initiate the conciliation process but the meeting proved to be a most unfortunate experience for the Unions. “The officials of the Department of Labour did not appear to be the impartial arbiters they should have been in such a situation. The UGWU and UGSSA representatives were told that strike action is not a right action and that strike action in their (the Unions’) situation was impossible. They were also told that what had been allowed before would not be allowed again (the Unions took that to be a reference to their 2015 strike action) and that they could face disciplinary consequences for their role in leading industrial action,” the joint statement outlined.

Moreover the unions have concluded that “The behaviour manifested in this meeting was a grave disappointment. We expect that officials of the Department of Labour will behave in a manner that is beyond reproach when intervening in disputes. Their conduct should be so unbiased that accusations of acting in favour of a particular political group would never arise. However, such threats will not cause us to deviate from our determined course,” the unions have asserted.