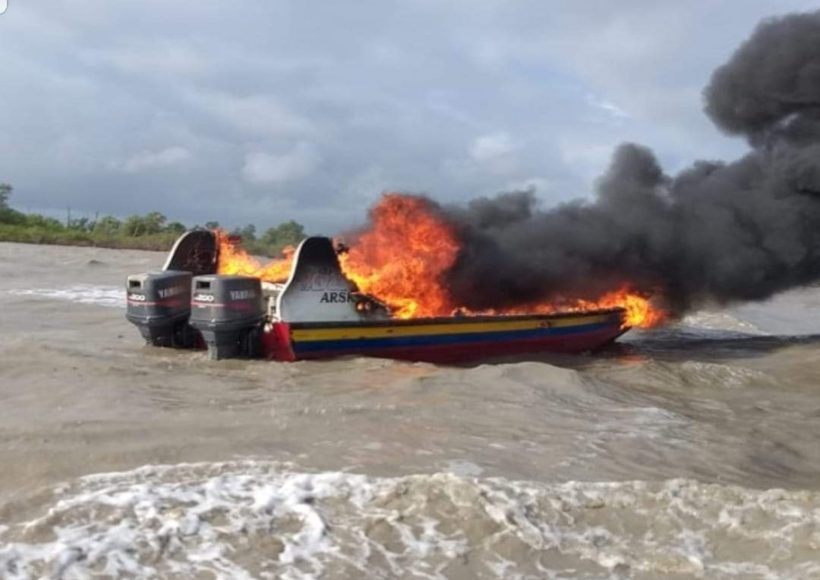 The Guyana Police Force has confirmed that two persons are dead following the explosion of a Venezuelan passenger boat that was carrying some 22 persons on Sunday morning just off the Waini River, Region One.

Only one of the deceased has been identified so far. He is Carlos Archer, a visually impaired man, who had been residing in Venezuela for a number of years. Archer was returning to Guyana—permanently with his wife 73-year -old Phyllis Archer, when tragedy struck.

Phyllis Archer and the remaining 19 passengers who were on the boat are hospitalized at the Mabaruma Regional Hospital. The passengers were identified as mainly Guyanese and Venezuelans.

The passenger boat was heading to Charity, Essequibo when it caught fire and exploded off the Waini Coast. The Guyana Standard has been informed that a small flame started around the engine and in less than a second, the engine exploded, causing the blaze to spread all over the boat.

Most of the passengers jumped off the vessel before the explosion. On a daily basis, a number of Venezuelans and Guyanese who had been residing in that country have been coming to Guyana in small boats to escape the crisis there.

The country is currently struggling with an ongoing power outage.