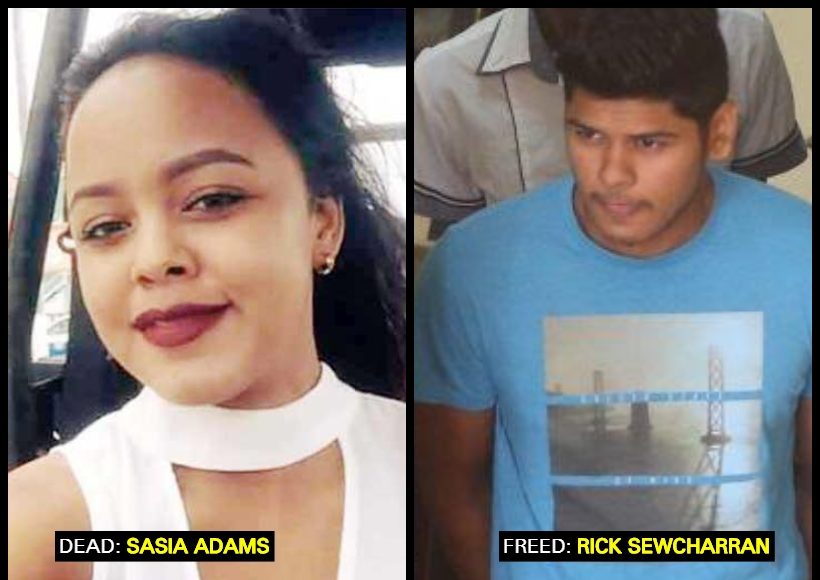 One day after the manslaughter charge against Rick Sewcharran, the boyfriend of 19-year-old Sasia Adams was dismissed; her relatives are insisting that he used his money, power and contacts to get out of jail.

Adams is the young lady who allegedly jumped from a moving car and subsequently died at a private hospital on June 10, 2018.

The case against 21-year-old Sewcharran was dismissed by Chief Magistrate Ann McLennan on the grounds of insufficient evidence.

This morning, the deceased’s sister, Sinasha Adams said that her family members are disappointed with the manner in which the case was handled by the prosecutor. “The prosecutor did not put up a good defense for us.”

Adams added, “When Rick lawyer was presenting, the prosecutor at no time, used any of the information or evidence he had to interject. He (Sewcharran) paid everybody so that is why he could walk free.”

In a social media post she said, “Today, yet another day, I’ll never forget March 11, 2019, the day RICK SEWECHERAN, the murder accused, walk freed after the prosecutor failed to provide substantial evidence.”

The young woman further added, “My sister is now at peace. She’s isn’t here to speak for herself, and the legal system failed to give her the justice she truly deserved. The thing is Sassy (deceased) choose RICK, she choose to love him, she choose him to be her person. And look where she is for just choosing to love someone.”

Adams was traveling in the car of her 21-year-old boyfriend around 20:30 hrs on June 10, 2018 on Lamaha Street, Georgetown when she allegedly jumped from the moving vehicle. She died from blunt trauma to her head.

A post-mortem examination revealed that her injuries were similar to someone who had been hit to the head with an object. She had no abrasion to her body to suggest she had in fact jumped from a moving car.

When detectives visited the deceased’s home, they found wet pain on a section of the bedroom. Bloodstains were also found on a curtain. Adams’ family members believed that the suspect murdered the teen during a fight at home since they claimed that he always had a temper.

The family will be deciding on whether they want to appeal the magistrate’s decision to free the accused.