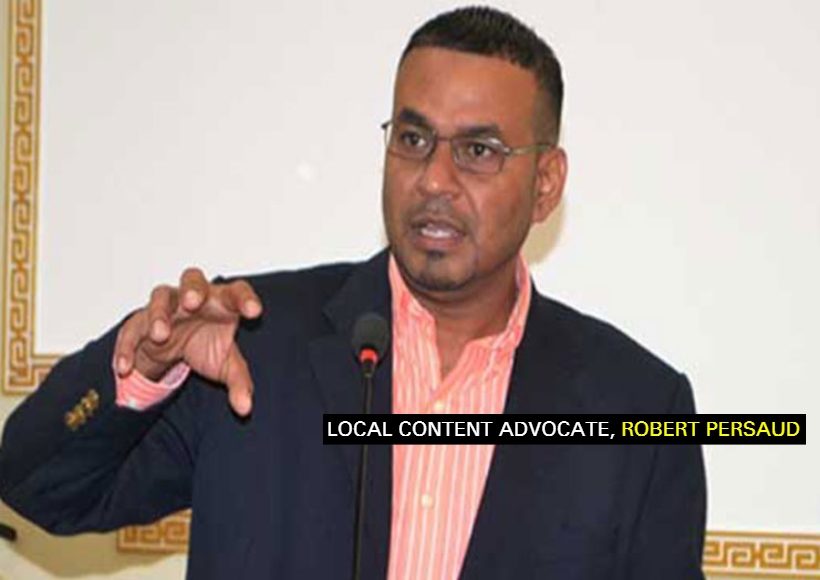 While others think that Guyana needs local content legislation, former Minister of Natural Resources, Robert Persaud is saying “not so fast” and instead believes that Guyana should first give the policy a try before turning to legislation.

Persaud, who now spends a significant amount of his time advocating for local content expressed his views of policy before legislation during a recent interview with Guyana Standard.

The advocate was asked if he sees the need for Guyana to arm itself with legislation so as to impose local content as a legal requirement for oil companies operating here.

He said, “I am advised that there was a first draft of a Local Content Policy [which received comments] and a final draft is being prepared as well as a White Paper. I am sure with broad consultations the pros and cons on moving towards legislation will be discussed. Legislation must serve as a mechanism to be employed only in instances of willful non-compliance. I am also interested in all stakeholders providing support for local capacity-building [especially skills training] and incubation for entrepreneurs and businesses seeking to invest in oil and gas services.”

But even if there is a decision for Guyana to move in the direction of building a legislative framework, Persaud has cautioned against “cut and paste.”

Persaud was pointed to the fact that countries like Ghana have legislated requirements for companies to be a certain percentage owned by locals. “Also, an individual who is a foreigner may, however, partner a Ghanaian citizen and register under the Incorporated Private Partnership Act to conduct business. The initial minimum level of local participation required is 15% ownership which is expected to be increased to 51% in 10 years.” (Read more at https://www.lexology.com/library/detail.aspx?g=90717bfe-ba53-4c4d-8960-0311ef56d138)

Persaud was further asked whether he thinks Guyana should consider similar if legislation is to happen.

The former minister responded, “It is important we develop a legislative framework that is relevant to Guyana, learning from the successes and setbacks of other countries. It would be ill-advised to do an entire cut and paste of any country. Guyana’s journey to build a world-class oil and gas is and will be unique and our policies and laws must be grounded in our own realities and national expectations.”