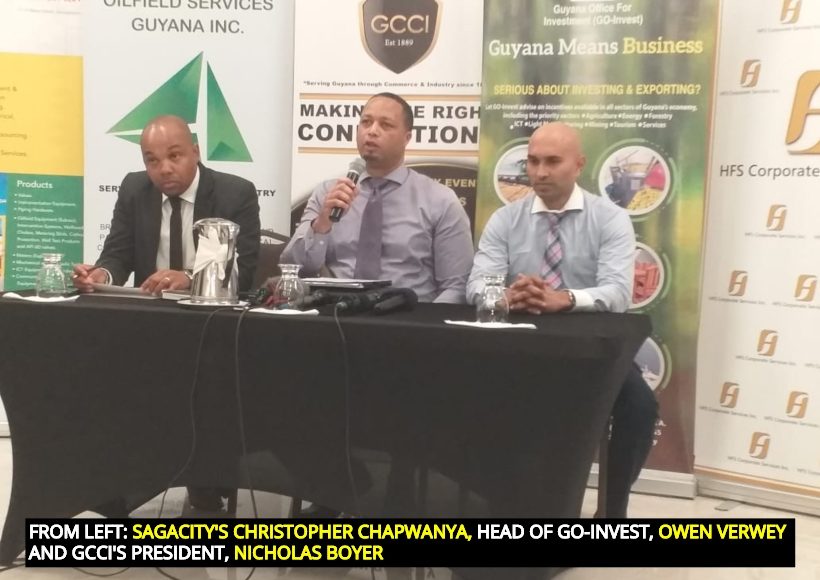 Well over 20 local companies are preparing to head over to Houston, Texas for the Offshore Technology Conference (OTC), to be held from May 6-8.

Today, Go-Invest held a joint press conference with the Georgetown Chambers of Commerce and Industry (GCCI) at Duke Lodge.

At that forum, Head of Go-Invest, Owen Verwey, told the media that there is much enthusiasm about the conference.

He indicated that Go-Invest, the Guyana Geology and Mines Commission (GGMC), and the Department of Energy will be representing government’s interest at the conference.

Verwey said that Guyana will be having a very large booth. “Within that booth will be over 20 businesses from Guyana, organised and supported by GCCI. This will give them the opportunity to showcase their offerings.”

Verwey said that the booth will be furnished with some “meeting tables” to facilitate business to business meetings.

Further, Verwey said that a “Guyana Night” is on the slate.

Meanwhile, President of GCCI, Nicholas Boyer also said that businesses are very enthused to be given the opportunity to head to Houston to showcase what they have to offer.

Boyer said that this is simply a continuation of the GCCI’s efforts to promote Guyanese businesses. He said that this initiative was the brainchild of GCCI’s Petroleum Sub-Committee.

Boyer recalled that the GCCI sub-committee did a number of missions; it went to Newfoundland in Canada for an oil conference two years ago and to Aberdeen, Scotland — home of the energy industry in Europe — last year and wanted to do something bigger for 2019.

He said that the initial proposal was to simply form a mission for OTC but then that was developed into actually showcasing and having a booth.

Boyer said that GCCI and Go-Invest saw it important for Guyana to have representation at the conference. “So now we will have a presence, a face. So all the people who are very curious about what is going on in Guyana will have an opportunity to shake hands and get familiar.”

Boyer said that the interest in Guyana is huge.

He indicated that even the American Embassy was surprised at the amount of interest from their side in Guyana. “The number of companies that indicated interest in the Guyana’s market, this nascent market, is extraordinary.”

Boyer said the main objectives are education, connection, and networking.

OTC 2019’s website indicates that it will have an opening general session on Monday morning, May 6, under the theme, “OTC’s Golden Anniversary Opening Session: The Next 50 Years of Offshore Developments”.

“The industry executives listed will explore how companies are preparing for the brave new world of digitalisation, automation, and machine learning. What is their vision for the future of offshore E&P operations?”