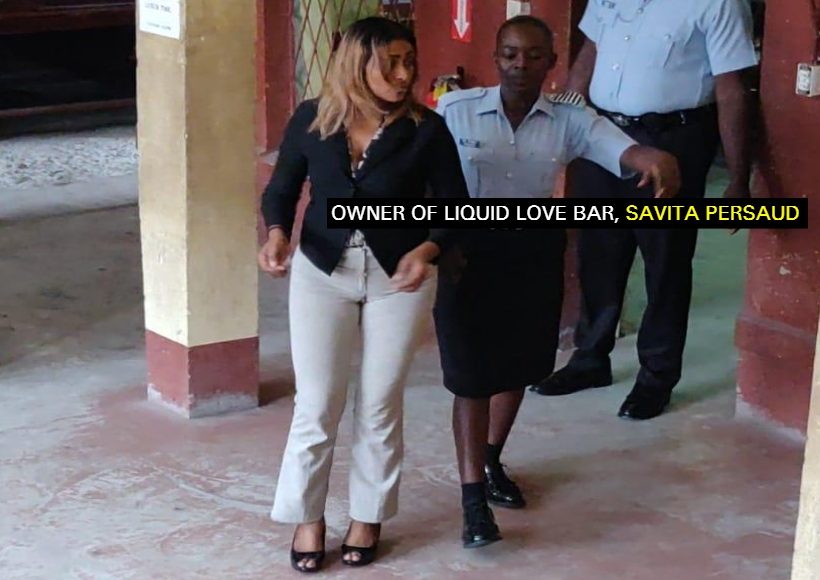 Two months after the owner of the Kitty-based Liquid Love bar was slapped with five offences in relation to human trafficking, Police Prosecutor Neville Jeffers this afternoon closed the case on behalf of the state.

The said owner, Savita Persaud, 33, of Station Street, Kitty, made her first court appearance on March 12, 2019 before Chief Magistrate Ann McLennan where she was slapped with five charges.

The first two charges stated that, between January 31, 2019 and March 8, 2019 at Station Street, Kitty, she engaged in trafficking in persons by recruiting, transporting, and harbouring two Venezuelans for the purpose of sexual exploitation.

Persaud received another two charges which alleged that, during the same period, she unlawfully withheld the identification cards of two Venezuelan nationals in aid of trafficking in persons.

The last charge stated that, during the same period, she employed a 17-year-old child on a property that sells intoxicating liquor.

The woman was not required to plead to the charges after they were read to her.

When the matter reconvened in the courtroom of Chief Magistrate McLennan today, the prosecutor called its final witness to testify in the case. Thereafter, the witness was cross examined by Persaud’s lawyer.

After both sides had finished, the magistrate adjourned the matter until May 21 for the defense to lay over submission on the defendant’s behalf, after which the magistrate is set to make a ruling.

According to information, the businesswoman employed the Venezuelan nationals to work at her business place and she also rented them a place to live. However, when the women were unable to pay the rent, Persaud reportedly confiscated their travel documents and forced them into prostitution.

It was reported that the Venezuelan women would normally have to hand over the monies to the businesswoman, who promised to return their travel documents.

The women subsequently reported the matter to the police. An investigation was carried out and Persaud was arrested for the offence.

The court prosecutor had objected to bail being granted to the businesswoman on the grounds of the prevalence of the offence, the penalty the charge attracts, and the fact that the Venezuelans are in protective custody. Hence, the magistrate remanded Persaud to prison. She is currently still on remand.