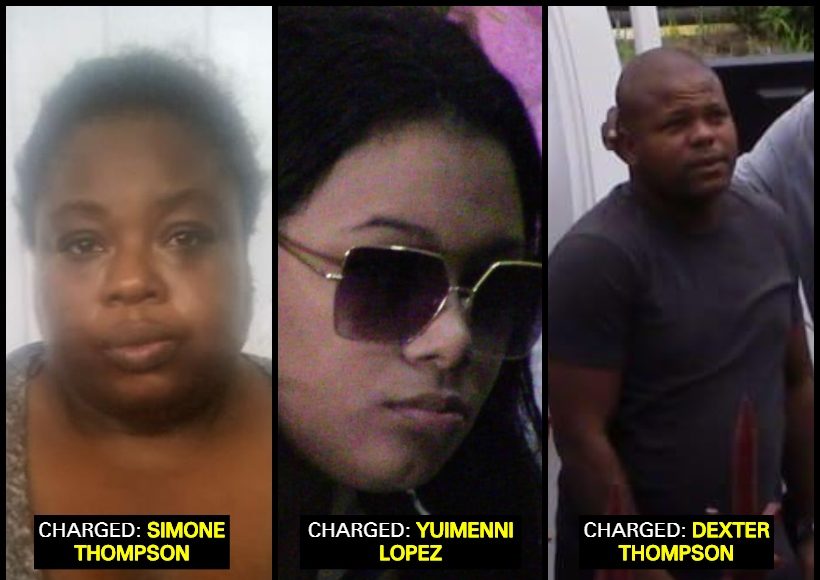 Days after police said they dismantled a counterfeiting ring that had been circulating fake US currency, a mother, her son, and her future daughter-in-law were today slapped with a total of 10 charges covering US$14,650.

Simone Thompson received a charge for each of the five persons she is said to have intended to defraud between March 25, 2019 and April 21, 2019. The charges alleged that she uttered a total of US$3,850 to Zaheed Harrynarine, Ravina Rajnaught, Wanitta Atkins, Ravindra Rajnaught, and Mondale Smith, knowing same to be forged.

It was further alleged that Dexter Thompson, on January 23, 2019 at Quail’s Optical, Thomas Street, Georgetown, with the intent to defraud, uttered US$1,800 to Clement Cumberbatch, knowing same to be forged. He was further accused of uttering US$2,500 to Rockmin Deltoro, with the intent to defraud and knowing same to be forged, on May 14, 2019 at East Street, North Cummingsburg, Georgetown.

Meanwhile, the first charge against Lopez stated that, on May 15, 2019 at Georgetown, without lawful authority or excuse, she had in her possession US$2,200 worth of forged currency. It was further alleged that on May 14, 2019 at East Street, Georgetown, with the intent to defraud, she uttered US$2,500 to Rockmin Deltoro, knowing same to be forged.

The last charge stated that on January 25, 2019 at Quail’s Optical, Thomas Street, Georgetown, Lopez uttered US$1,800 to Clement Cumberbatch, knowing same to be forged.

The defendants all pleaded not guilty to the charges after they were read to them by the magistrate. They were all represented by attorney-at-law Darren Wade in association with attorney-at-law Stanley Moore.

Wade, in an application for reasonable bail for his clients, told the court that the defendants had cooperated with the police and will subject themselves to any conditions by the court.

However, Police Prosecutor Sanj Singh made no objections to bail being granted to the two Thompsons but asked the court to remand Lopez to prison on the grounds that she is a Venezuelan national and has no ties to Guyana.

He added that, if bail is granted to Lopez, there is the possibility that she will flee the jurisdiction.

On those grounds, the Magistrate released Simone Thompson on $250,000 bail while Dexter Thompson received $200,000 bail. They are expected to make their next court appearance on June 14, 2019.

However, Lopez was remanded to prison and the magistrate noted that the police had no record of the Venezuelan woman entering Guyana. She was instructed to make her next court appearance on May 21, 2019.

According to information, Simone and her son Dexter, along with his fiancée Lopez, have gone about for months fleecing victims of millions.

It is reported that the trio would approach persons and ask them to change US currency for them.

The women would also go into salons and boutiques and offer to pay in US currency. More and more persons are coming forward with similar stories and more charges are likely to be laid against the defendants.