Home News I will not defend PPP spies, regardless of race- Dr. Hinds rebuts... 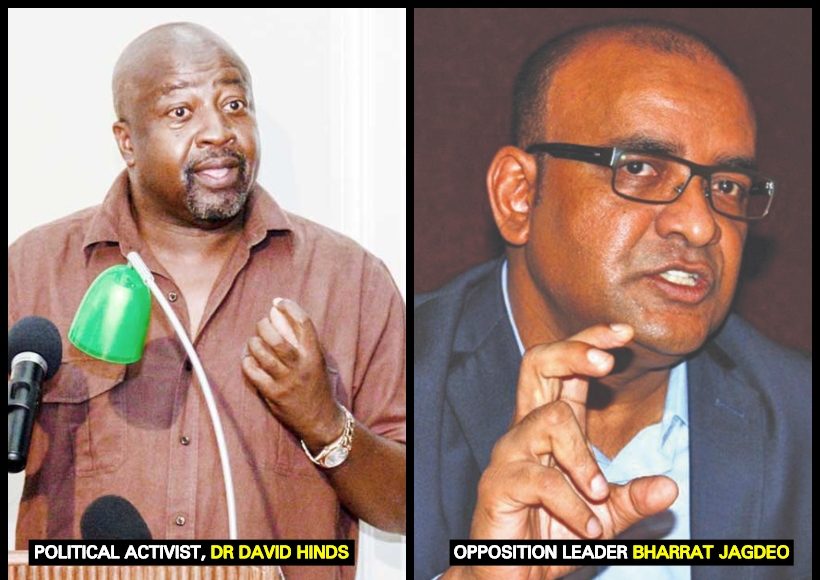 There is a stark difference between a whistleblower and a political spy. Upon unearthing corruption or information regarding unethical behaviour, the whistleblower takes it to agencies or groups which can highlight the issue and seek for there to be just penalties against the wrongdoer. A political spy, on the other hand, seeks out information and classified material in order to provide it to another party.

With this understanding in mind, Executive Member of the Working People’s Alliance (WPA), Dr. David Hinds, categorically stated that there are political spies of the PPP regime embedded in the public service. He said that he will not represent the interest of such individuals irrespective of race.

Recently Opposition Leader, Bharrat Jagdeo chided Dr. Hinds over his comments that PPP moles need to be flushed out of the public service. Jagdeo said that he lost the little respect he had for Dr. Hinds because of his statements about the need to purge.

Also, Jagdeo told the media that Dr. Hinds, who is also a black-rights activist, conveniently represents the cause of ordinary Afro-Guyanese, especially when representation can conflict with his political bias.

Speaking with the Guyana Standard today, Dr. Hinds said, “The ordinary Guyanese he is talking about are the political spies, the people who are planted there by Jagdeo and the (former President, Donald) Ramotar government. And these people who are there today, they didn’t blow the whistle when corruption was going on under those governments.”

The University Professor added, “In fact, some of them were involved in the corruption and Jagdeo is now calling them ‘ordinary people.’ But I cannot represent the interest of political spies. These people he is talking about are reporting to him. Why not other political parties? Why not non-governmental organizations? Why not Transparency International Guyana Inc.? When these ‘reports’ are given only or mostly to the PPP, it should raise eyebrows about the motive of the so-called whistleblowers.”

At his press conference, Jagdeo said that Dr. Hinds spoke about the removal of PPP moles because he wanted to defend new Minister of Public Service, Tabitha Sarabo-Halley regarding the recent illegal actions in terminating the services of public servants following a leak that $20M in payments were made to Minister Simona Broomes’ children.

But Dr. Hinds made no such references in the article to which Jagdeo referenced.

The two cases which were posed to Dr. Hinds for his commentary involved the disclosure of customs forms and tax information belonging to Finance Minister, Winston Jordan and the release of the personal bank statements of Minister of Public Infrastructure, David Patterson.

Dr. Hinds told this news site that he found Jagdeo’s insertion of an entirely different matter, disgusting and unfair.

The University Professor said, “Jagdeo wants to tie the Minister to me and I think that it is unfair to her. She just got the job at the highest level and should be left alone to find her way, make mistakes, and learn from them. I think it very cowardly to try to undermine a young and upcoming political person by trying to tie them to me…”

Dr. Hinds was also perturbed by Jagdeo’s assertion that the “moles/spies” that he called to be flushed out of the public service are also African Guyanese “as if to say that the ethnicity of the spy makes the infraction less wrong.”

The political activist categorically stated that his defense of black people has to do with black empowerment.

He said, “I have never knowingly defended black wrongdoing. My entry into politics has been about fighting against a black government and my attitude towards this government is also known. I have been critical of them. I have no automatic love affair with any party or government. My support has to be earned. My track record speaks for itself.”

Dr. Hinds said that he will forever be an advocate for black empowerment, but never for “black slackness.”