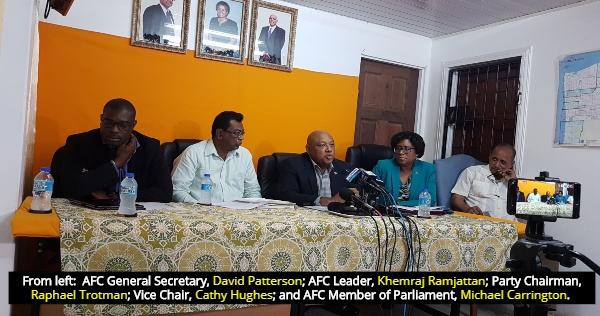 With regional and general elections possibly right around the bend, the Alliance for Change (AFC) reserves the right to appoint whomever it chooses as the prime ministerial candidate. However, the party is yet to discuss its selection with its governing coalition partner, the A Partnership for National Unity (APNU). This is according to the party’s General Secretary and government’s Public Infrastructure Minister, David Patterson.

The AFC has, thus far, endorsed its leader and Minister of Public Security, Khemraj Ramjattan, for the prime ministerial post.

During a press briefing at the AFC’s headquarters in Georgetown, the party executive said that the public should not be swayed by comments being peddled that the party will be steamrolled by its governing partner in the process of nominating the next PM candidate.

Patterson, who was involved in the crafting of the Cummingsberg Accord – the instrument under which the Coalition is founded – said the agreement specifically states that “the AFC shall nominate the Prime Ministerial Candidate, and the APNU shall nominate the presidential candidate.”

“[We] will not entertain any discussion that changes that, and that’s just the way it is,” Patterson said.

Asked whether there were any discussions with the APNU on the AFC’s choice, Patterson responded in the negative.