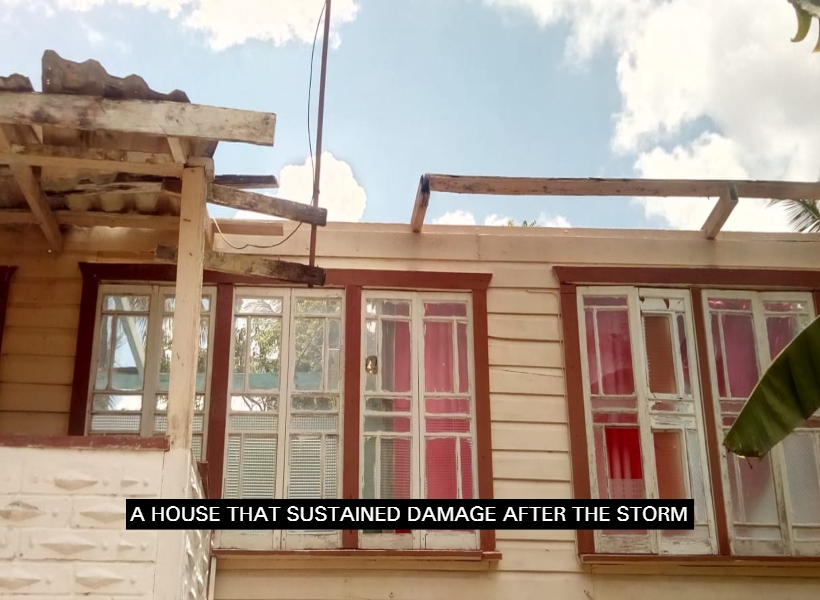 The Civil Defence Commission (CDC) has been monitoring weather patterns countrywide. This comes in the wake of intense rainfall across Region 10, Upper-Demerara-Berbice from August 23-24. This, the Commission, said is influenced by the prevailing Inter-Tropical Convergence Zone (ITCZ).

According to the Hydrometeorological Service, the highest level of rainfall was recorded in the community of Watooka, Linden, which measured 30.77 mm (1.21 in). Accompanying the rainfall was high winds experienced by residents across the town.

On August 24, a rapid assessment team was deployed. It was headed by Captain Salim October of the CDC and comprised of representatives from the region and affected communities.

Due to the excessive rainfall, flash floods occurred across the town with Mac Kenzie and other areas experiencing brief water accumulation. The strong winds resulted in damage to roofs and infrastructure of both businesses and private residences. The damaged roofs made premises vulnerable to rainfall wetting both business and personal possessions within buildings.

According to the CDC, the homes of approximately 25 families were severely impacted by roof and infrastructure damage along with four businesses. Public buildings that also suffered roof damage were the Silver Town Community Centre, Mackenzie High School and Lichas Hall and a communications tower at Blueberry Hill Squatting Area which collapsed.

Over the next few days, the CDC will continue to assist those affected.

The commission is advising the public to take all necessary precautions to protect against the imminent threat of flooding. The public is also advised to remain alert and aware of the water levels and weather situation at all times.
Persons are urged to contact the Civil Defence Commission to report flooding in their communities on (592) 226-1114, 226-8815, 226-1027 or 225-5847, or contact its 24 Hours National Emergency Monitoring System (NEMS) on (592) 623-1700 and 600-7500.