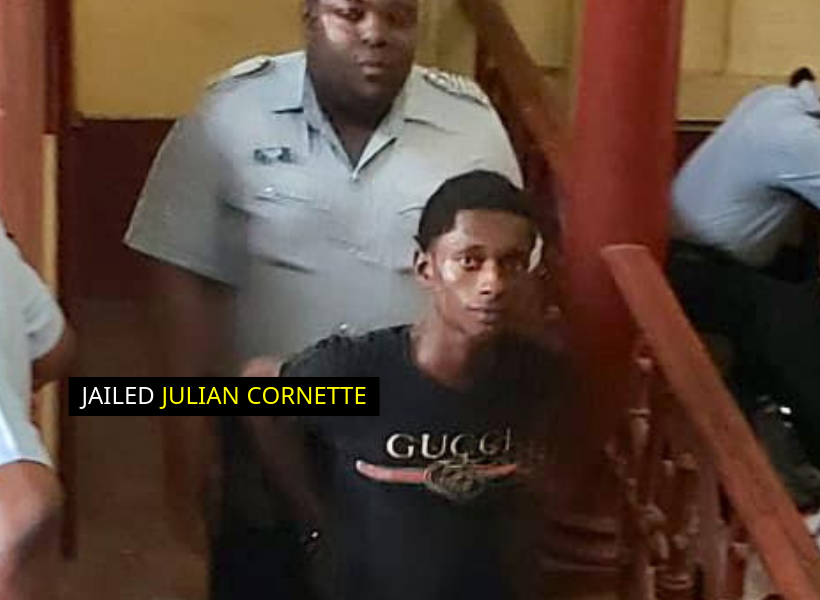 A man, who admitted to robbing a woman because he was frustrated and needed money to purchase milk and pampers for his baby, was today sentenced to two years imprisonment for the crime.

The sentence was handed down by Principal Magistrate Faith McGusty in the Georgetown Magistrates’ Courts.

Twenty-year-old Julian Cornette, a Carpenter, pleaded guilty to the charge which stated that on September 9, 2019, at Light Street, Georgetown, he robbed Yelema Vornel of one phone valued $50,000, a bag valued $6000 and $3000 cash.

Cornette, in his explanation stated, “I was going to a party the night but me and my friends decided to go and have a few drinks on the seawall.”

Cornette added, “While at the Seawall, my girl call me and say the baby need milk and pampers and I didn’t had no money. I asked my friends them and they ain’t had either so I get frustrated and start tek off my clothes and I lie down on the road because I was really frustrated; me ain’t even had a $100 on me.”

He continued, “I tek off my shoe and I walked  till I get blister so when I see the woman walking I went up to her and snatched the bag and start run. When I start run I hear a man crank up his gun and the woman tell him shoot.  When I hear shoot I seh I can’t dead and I jump over a fence and get away.”

Facts presented by Police Prosecutor Annalisa Brummell stated that, on the day in question, around 10:30 hrs, the victim was walking on Light Street when she was approached by the defendant who snatched her bag.

The court heard the woman held onto the bag and the defendant dealt her several cuffs about her body.

The Prosecutor added that Cornette attempted to run away, but an alarm was raised by the victim. Shortly after, ranks in the area were able to apprehend him.

A search was then carried out on his person and the stolen articles were found in his possession. While at the station, an identification parade was conducted and Cornette was positively identified by the victim as the person who robbed her.

Cornette told the court, “Is because no work ain’t deh round for me. It will never happen again and I’m sorry.”

The Magistrate, after listening to facts, sentenced Cornette to two years’ imprisonment for the offence.