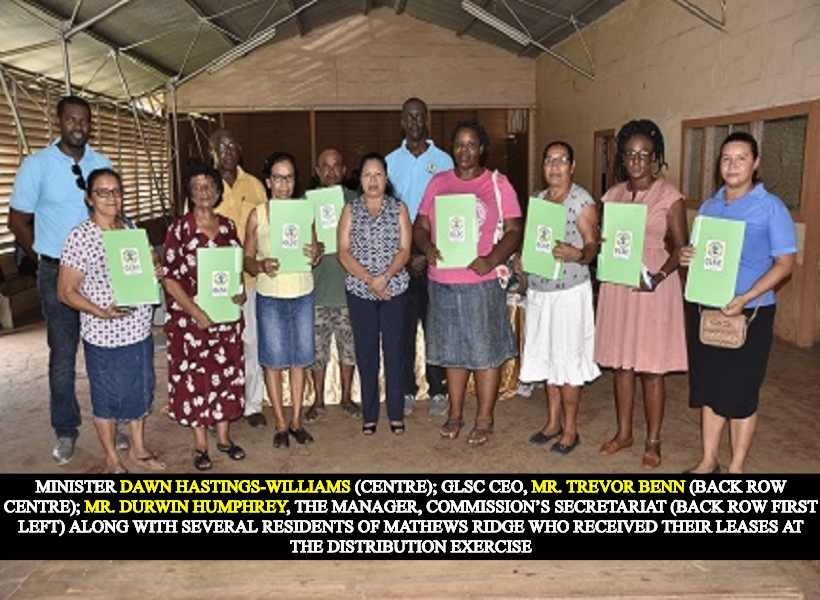 Said to be in keeping with a promise made to the residents in May by the Director-General of the Ministry of the Presidency, Mr. Joseph Harmon, Minister of State, Mrs. Dawn Hastings-Williams, and the Guyana Lands and Surveys Commission (GLSC), have distributed 79 land leases to the residents of the Matthews Ridge, Barima-Waini (Region One).

The residents have been occupying lands without any legal documentation, for many years.

Minister Hastings-Williams said the distribution of the leases is a testament of the hard work done by the GLSC staff, in keeping with the Government’s plan to ensure that land acquisitions for Indigenous communities are given priority.

“As an Indigenous woman with a humble background, I know the importance of land tenure for Indigenous people… Therefore, we continue to work assiduously to provide a better quality of life for everyone and under the leadership of His Excellency President David Granger, our aim is to provide housing solutions and lands to every Guyanese,” she said.

Thirty residents in attendance received their leases, while the remainder will have to uplift the legally binding document from the GLSC’s Sub-Office in Port Kaituma.

Meanwhile, Commissioner and Chief Executive Officer of the GLSC, Mr. Trevor Benn, said that the distribution exercise was in keeping with the vision of the Government under the stewardship of President Granger, to ensure that every Guyanese own the land which they occupy or are given the opportunity to own land as part of their patrimony.

The Minister and team also visited the wider Port Kaituma community, where she met with residents to discuss mainly land-related issues. She assured residents that their respective complaints will be addressed.