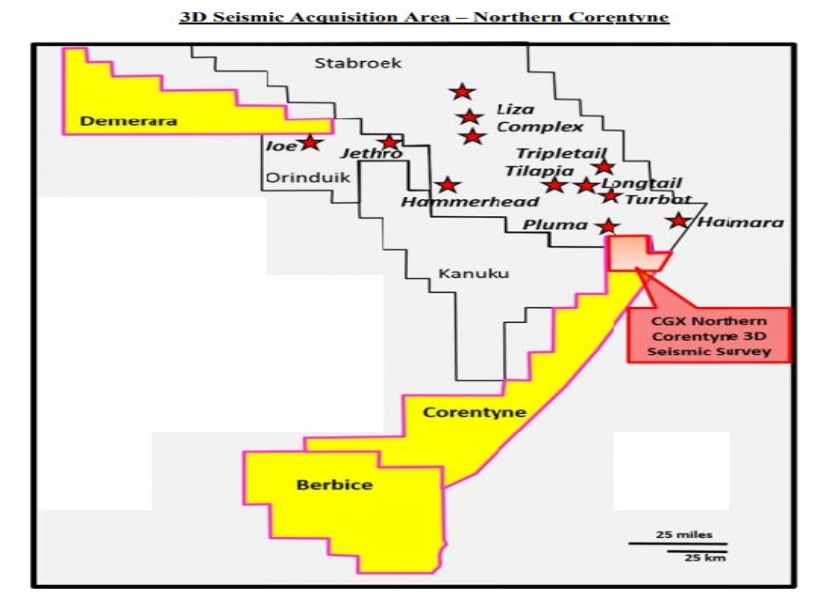 The significant discoveries that were made by Tullow Oil in the Orinduik Block and ExxonMobil in the Stabroek Block have motivated CGX Energy Inc. to move up its drilling programme. In addition to one well it will be drilling on the Corentyne Block, CGX intends to drill its first well on the Demerara Block in 2020 instead of 2021.

The decision to drill the Demerara block one year ahead of schedule seems to be prompted by the most recent oil discovery at the Joe well in the Orinduik Block. The Joe discovery was made in the Upper Tertiary Play and therefore de-risks shallow water exploration offshore Guyana. Interestingly, the Joe-discovery is just a few hundred metres away from the edge of the Demerara block.

Based on due diligence conducted by this news agency, it was discovered that CGX will also be drilling a well in the northern side of the Corentyne block in 2020 as well following 3D seismic survey.  CGX was initially drilling one well near the Utakwaaka well which is located almost in the middle of the block. But following ExxonMobil’s Pluma and Haimara discoveries at the edge of the Stabroek Block, which also borders the Corentyne block, CGX decided to re-sequence its work programme.

Guyana Standard understands that CGX Energy Inc., through its wholly-owned subsidiary CGX Resources Inc. as the operator of the Corentyne Block under a Joint Operating Agreement with Frontera Energy Guyana Corp (“FEGC”), has executed a contract with PGS Geophysical SA (“PGS”) to provide acquisition and processing of the full broadband marine 3D seismic survey.

Professor Suresh Narine, Executive Chairman of CGX, told the market that the recent discoveries in proximity to the northern region of the Corentyne Block and in the shallow water east of the Demerara Block present a compelling endorsement of CGX Resources Inc re-sequenced plans to drill exploration wells back-to-back on its Corentyne and Demerara Blocks in 2020, following further forensic seismic investigation of the northern region of the Corentyne Block.

Professor Narine said, “CRI’s arrangement with PGS will allow us to take advantage of PGS’ previous experience in this region of the basin to both acquire and process 3D seismic crucial to our understanding of the northern region of the Corentyne Block.”

In the meantime, the Chairman said that CGX Resources Inc has been streamlining its prospects in the Demerara Block based on the 3D seismic campaign it conducted over the Demerara Block in 2014. Guyana Standard understands that the arrangement with the Contractor will allow CGX Resources Inc. to utilize funds previously committed to the Ralph Coffman rig to drill the Utakwaaka well to any of the Contractor’s rigs that are utilized to drill the Corentyne and Demerara Blocks in 2020.