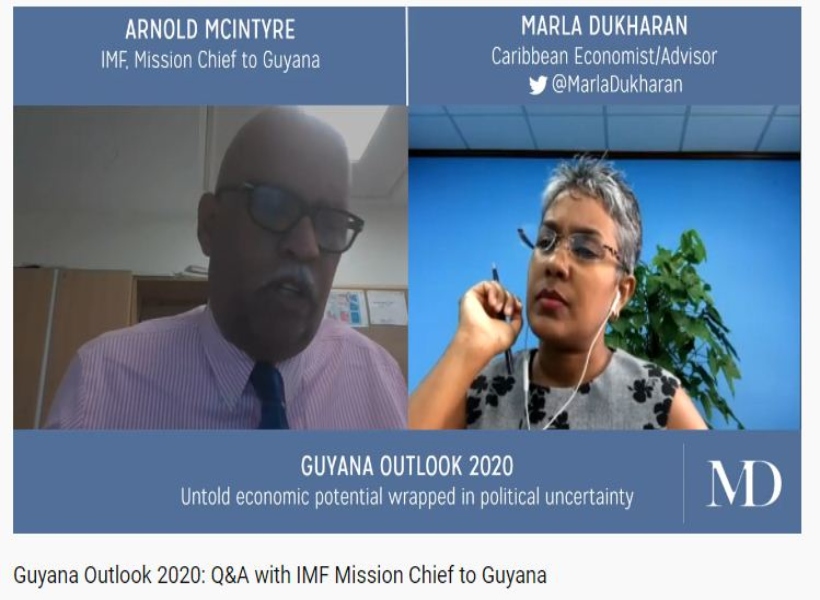 Even before Guyana gets its first barrel of oil, various sectors are already noting the impacts of the anticipated oil boom. This is particularly so for the banking sector says International Monetary Fund (IMF) Mission Chief to Guyana, Arnold McIntyre.

During a YouTube discussion with Caribbean Economist and Advisor Marla Dukharan, McIntyre noted that already, there is great interest from other banks to enter the market to offer their services.

Even in the face of that positive sign, McIntyre said that Guyana has to pay careful attention to the growth in credit as the financial sector development is likely to be very rapid.

The IMF Mission Chief said, “…When we were there, residential mortgages for the first four months of 2019, compared to the same period last year, have gone up by 16 percent and that is a substantial increase. A lot of that is coming from the private sector, people building residential homes for the oil workers and so forth and so we expect credit demand will increase while growth does.”

In addition to this, the official said that non-performing loans in the banking sector are still an issue to be watched. In fact, the IMF’s Article IV Mission report on Guyana which was released in September last did speak to this issue too.

That document states, “The financial sector remains sound and the banking system is well-capitalized, liquid and profitable. Despite trending downwards, non-performing loans (NPLs) for some banks remain high. The BoG intends to continue closely monitoring this trend and has increased the frequency of reporting by commercial banks, enhanced on-site inspections and intensified follow-up actions to ensure greater bank compliance, as well as hold regular discussions with commercial banks.”

McIntyre was also keen to note that there is no shortage of understanding for the challenges that lie ahead. He said that the Central Bank is preparing itself in this regard and will be receiving technical assistance from the Fund and the Caribbean Regional Technical Assistance Centre (CARTAC) regarding the strengthening of its regulations.