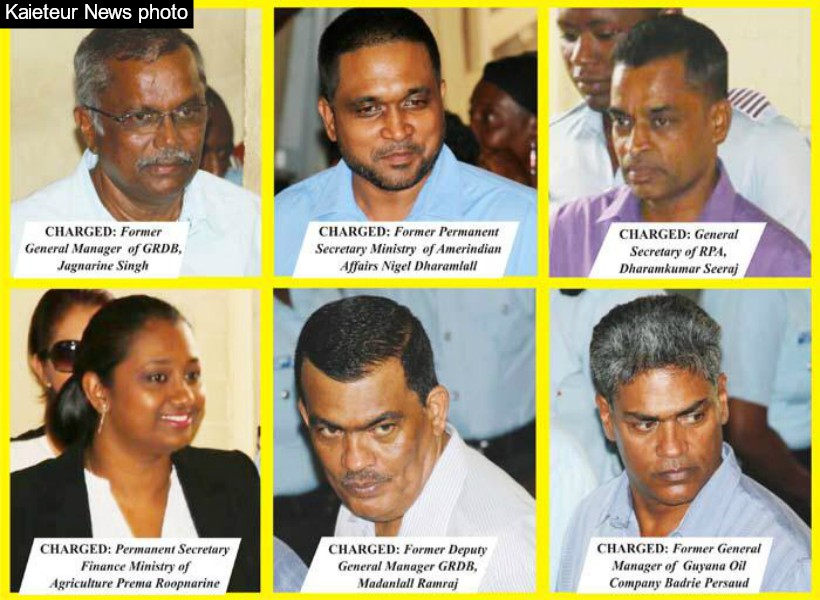 This afternoon, when the matter was called in the courtroom of Magistrate Daly, the court orderly summoned the Special Prosecutor.
No one answered.

This prompted Attorney-at-law Anil Nandlall and Glenn Hanoman who are representing the defendants making a request for the matters to be dismissed.

The lawyers stressed the fact that apart from today, the Special Prosecutor has been absent from court on several other occasions.

The Magistrate, after listening to the lawyers, dismissed all the matters against the defendants on the basis of want of prosecution.

The charges alleged that between January 1 and December 31, 2012, with intent to defraud, they omitted or concurred to be omitted $77.3M from the general ledger of the GRDB’s Republic Bank account.

The defendants were all out on $500,000 bail each pending the hearing and determination of the trial.

GRDB is the authority charged with overseeing the rice industry throughout the country. Upon entering government in May 2015, the David Granger-led administration immediately ordered a number of forensic audits to determine the health of the state agencies.

With regards to the GRDB report, it was noted that over a three to four-year period, more than US$500M from the PetroCaribe proceeds (Venezuela rice-for-oil deal) would have passed through the accounts of the entity.

Among some of the “anomalies” found were loans without proper paperwork or promissory notes. There were other instances of persons in the agency using GRDB’s money to trade in foreign currency.

The losses for the government would have been significant, especially if the money was traded for less than it should have been.

The Auditor-General and the forensic audit reports have all pointed to severe deficiencies in the manner the monies of the state have been handled by the entities.