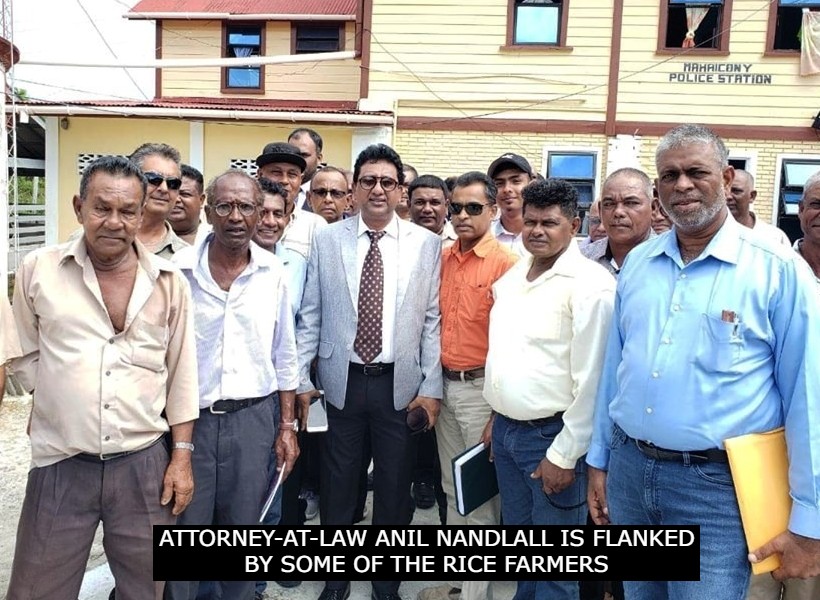 Attorney-at-Law Anil Nandlall, acting on behalf of the Guyana Rice Producers Association (GRPA), has filed a legal proceeding in which he is asking that the appointment of Omadatt Chandan, Chairman of the Rice Assessment Committee of Region Five, be quashed since it is contrary to the law.

Among other things, he is also asking for a declaration that all decisions made by the Rice Assessment Committee of Region Five and the Mahaica/Mahaicony Abrary Agricultural Development Authority MMA/ADA on October 8, at the Mahaicony Magistrate’s Court, is contrary to the law.

In that regard, at a hearing convened on November 12, at the Mahaicony Magistrate’s Courts, Nandlall laid over submissions in which he argued that the Committee was incapable of hearing the complaint filed by the MMA/ADA.

In a Fixed Date Application (FDA) filed at the High Court in Demerara, Nandlall contends that the appointment of Chandan made on or about June 27, 2018 by the Minister of Agriculture is contrary to law, in excess of jurisdiction, violates the provisions of the Rice Farmers (Security of Tenure Act) Chapter 69:02, is an abuse of power, is in breach of the Constitution of Guyana, is in breach of the principles of natural justice, is illegal, ultra vires, null, void and of no effect.

Nandlall also contends that all proceedings filed against 20 members of the Guyana Rice Producers Association by the MMA/ADA which commenced hearing at the Mahaicony Magistrate’s Court on October 8, 2019, are contrary to law, in excess of jurisdiction, violates the provisions of the Rice Farmers (Security of Tenure Act) Chapter 69:02, are an abuse of power, are illegal, ultra vires, null, void and of no effect;

In an affidavit in support of the FDA sworn to by Dharamkumar Seeraj, General Secretary of the GRPA which membership extends from Regions Two, Three, Four, Five and Six, he contends that Chandan purports to be Chairman of the Rice Assessment Committee. Seeraj says that he has instituted legal proceedings on behalf of the 20 members who are unable to do so for financial reasons.

According to Seeraj, the members occupy lands by virtue of Leases for State Land issued under the hand of the President and that although rents due and owing under these Leases are payable to the MMA/ADA the State is the lessor under the provisions of the leases. He said that during September 2019, the members of the Guyana Rice Producers Association were served with proceedings ex facie instituted under the provisions of the Rice Farmers (Security of Tenure) Act, Chapter 69:02, claiming various amounts due and owing in arrears of rent and drainage and irrigation charges, in respect of lands of which they are in occupation.

Seeraj stated that during the hearing of these proceedings, Attorney-at-Law Javed Shadick, acting on behalf of Nandlall, who was at the time out of the jurisdiction, requested leave to make preliminary submissions on the legality of the Chairman to the Committee and the jurisdiction of the Committee, to hear and determine the applications before it.

Chandan, according to Seeraj, rejected the application made by Javed for an adjournment and informed him that he is not prepared to entertain any legal submissions in writing or orally and that he will proceed to hear the matters. He said, “On that day [October 8] approximately fifty (50) matters were called and on each occasion Mr. Javed Shadick, Attorney-at-law, made the aforesaid application and each application was rejected by [Chandan], on the grounds stated above.”

He added that despite Shadick’s vehement objections Chandan gave judgments against two members of the Guyana Rice Producers Association totaling approximately $4M, and that the remaining matters were adjourned to October 29, only because persons informed Chandan that they needed time to retain a counsel. On that date, Seeraj said that Nandlall appeared at the hearing and requested that Chandan and the MMA/ADA do not proceed to hear and determine the proceedings relating to the rice farmers for the reasons advanced in his submissions.

In the circumstances, Seeraj said that Chandan requested that Nandall produce evidence in support of the legal submissions and same was sent to his office contained in an affidavit. According to him, Chandan claims to be the Corporate Secretary and Legal Advisor of the National Drainage and Irrigation Authority, and as a Corporate Secretary he must be ex officio a member of the Board of Directors of the Authority, who are appointed on terms and conditions as the Minister determines as per Section 7 (4) of the Drainage and Irrigation Act, Chapter 64:03.

For the aforementioned reason, Seeraj argues that the MMA/ADA cannot institute proceedings for or claim drainage and irrigation charges as they purported to do in the proceedings pending before the Rice Assessment Committee. And therefore, he further argues that the MMA/ADA being a State agency, and the State being the landlord of the rice lands for which the claims relate, is prohibited from instituting proceedings by the provisions of the Rice Farmers (Security of Tenure) Act.

Among other things, most instructively, the General Secretary states that Chandan is presiding over a claim for drainage and irrigation charges, while he is Secretary for the Board of the National Drainage and Irrigation Authority, compounds the perversity and bias complained of. In the circumstances, he is praying that the orders being sought in his application are granted, along with costs, and any such or further order as deemed just by the court.