Home Court Haitians fined, to be deported after admitting to illegal entry 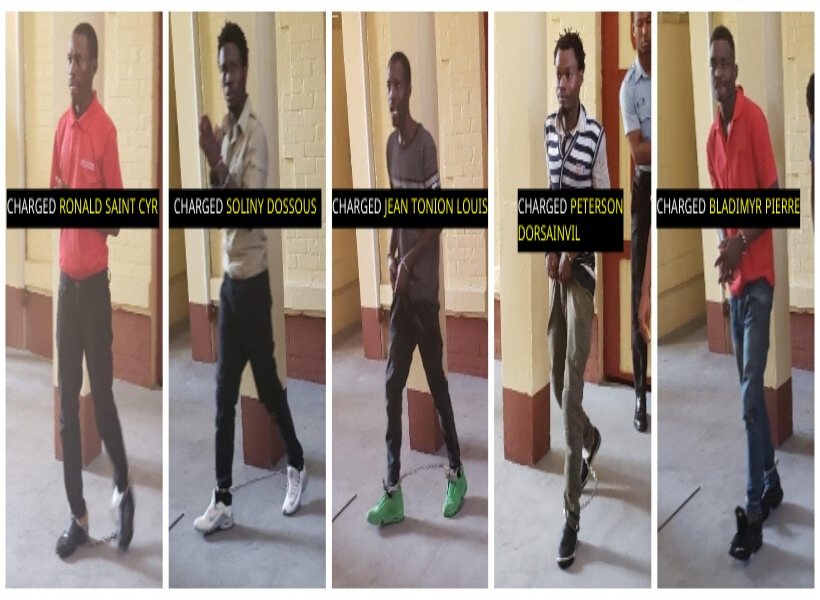 Five Haitians, who told the court they came to Guyana to visit, were this morning charged with illegal entry, while another was charged for overstaying.

The men, Jean Tonion Louis, 23, a mason; Ronald Saint Cyr, 27, a teacher; Jesudonne Clerveau, 29, a teacher; Soliny Dossous, 35, a student and Bladimyr Pierre, 25, a student, were all charged with illegal entry.

It is alleged that on November 18, 2019, at Springlands, East Berbice, Corentyne, they entered Guyana by sea and disembarked without the consent of an Immigration Officer.

The men were charged separately for the offence and pleaded guilty.

Facts presented by a police prosecutor, Gordon Mansfield stated that the defendants arrived at Springlands from Suriname and were proceeding to Brazil.

However, police, acting on information, intercepted the defendants.

A search was then conducted on their persons and it was revealed that they entered the country and did not present themselves to an immigration officer.

The men were then arrested and taken into custody. Hence, charged for the offence.

Meanwhile, Peterson Dorsainvil,27, a mason, pleaded guilty to the charge which stated that between August 7, 2018, and November 18, 2019, at Georgetown, he failed to comply with conditions, having been permitted to stay in Guyana from August 1, 2018, to September 6, 2018, he overstayed the said period.

The Magistrate, after listening to the facts, fined the men $40,000 or in default three weeks imprisonment.

Upon paying the fine, or spending the time, the men will be deported to Haiti