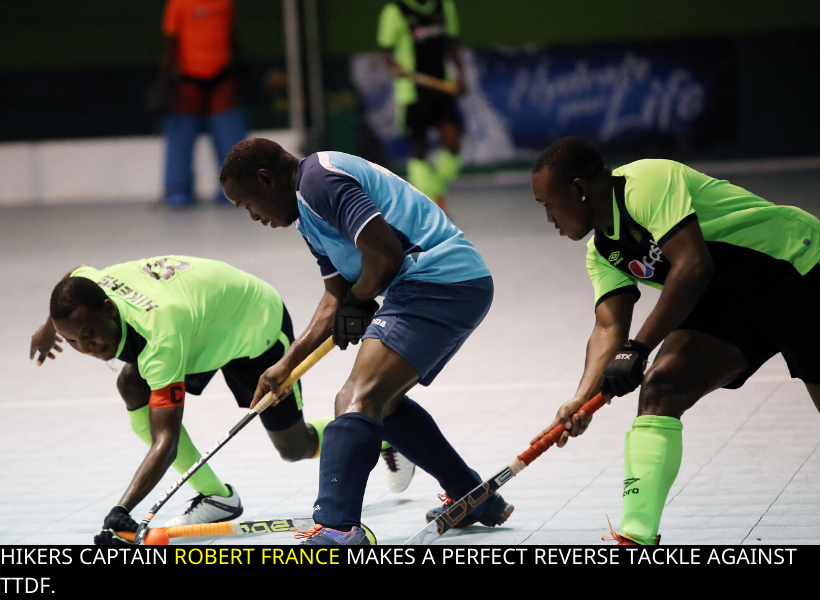 As the final day of the Diamond Mineral Water Indoor Hockey Festival beckons, the Pepsi Hikers secured the top spot in the men’s division at the completion of the pool round.  So close was the final placements that it came down to one goal difference between them and second placed Queens Park. TTDF finished in third position and will face Queens Park in the first semi-final while fourth placed Bounty GCC will face the Hikers in the second.

George United played unbeaten in the ExxonMobil ladies division to finish on top of the table and will play against fourth-placed Saints in one semi-final while the other will be an all-GCC clash with the GBTI GCC Tigers finishing in second and the Spartans in third.

Unbeaten Queens Park faces the only team to muster a draw against them, fourth placed Fatima, in the first semi-final of the Lucozade veterans division.  Local powerhouses Old Old Fort and Vintage GCC finishing second and third respectively will contest the other semi-final.

The surprise of the day’s play probably can be attributed to the Bounty GCC 7-2 victory over the vastly improved YMCA Old Fort who had easily won the last time the two teams played one month ago in the GTT National Championships.  GCC never seemed genuinely threatened as they held the lead from inception and while Old Fort did have their chances, could not match the offensive force of GCC. Quite predictably, Queens Park got the better of the youthful Saints by 6-2 while the Hikers etched out a victory over TTDF by 6-5.

George United made light work of their double opponents of the day, first defeating the Spartans by 9-2 and then Saints by 9-0 to secure the top spot in the ExxonMobil women’s competition.  The lone Lucozade veterans match saw an impressive 8-3 victory over Vintage GCC. The match promised to be more competitive in the beginning but the second half was all one-way traffic as Queens Park stamped their dominance on a tired looking Vintage.

The semi-finals of the three divisions begin on Sunday at 11am while the three finals begin at 4:40pm.