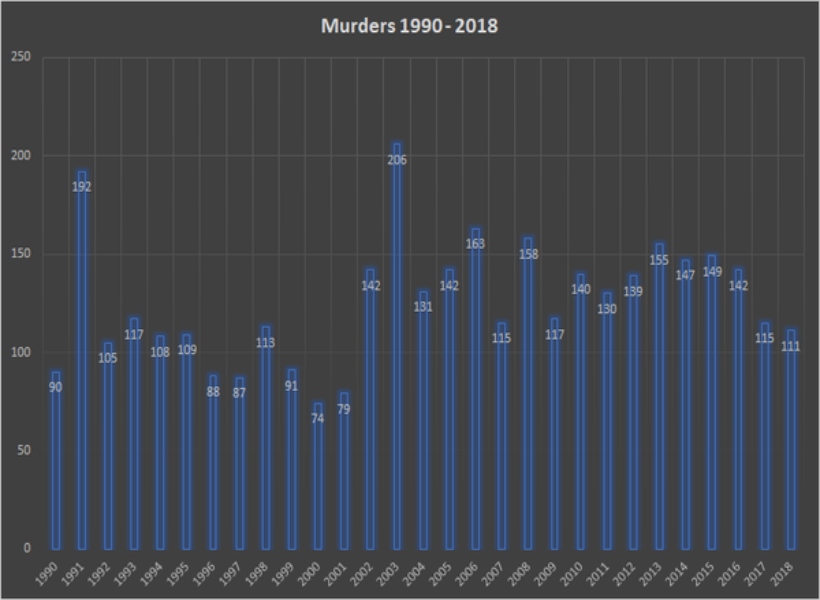 Guyana has recorded over 3,600 murders in 28 years. This data comes from the Criminal Investigation Department (CID) of the Guyana Police Force (GPF). The information is published on the Guyana Bureau of Statistics website under the heading, “Demography, Social and Vital Statistics.

From the year 2002 to 2018, Guyana has never recorded murders under triple digits, the data shows. In fact, the lowest number recorded between that 16-year period is 111 in 2018.

From 2000 to 2008, there were 1,210 reported murders; or 33.1% of all deaths between 1990 and 2018. This period is a contentious one, when the government of the day, the People’s Progressive Party/Civic (PPP/C) was, and continues to be harangued for presiding over one of the deadliest periods of Guyana’s post-independence history.

The government – the A Partnership for National Unity (APNU) – continues to cast blame on the PPP/C for this period; accusing its parliamentary opposition of affiliating with phantom squads that reportedly carried out judicial killings during that period.

The veracity of these claims is yet to be proven, despite the APNU’s consistent reference to that period, and being in office for four years.